After fruitlessly spending 2 days trying different video editors (DaVinci, Shotcut) and test uploading videos to YouTube over and over (with zero success at bettering YT play quality), I finally noticed something within the “Stats for Nerds” you can see by r-clicking on YT player. Then I found some videos explaining the meaning of what I’d noticed.

Basically, YouTube uses two different codecs when re-processing your uploaded file. So if your channel/videos get a lot of average views (you’re popular, in other words), YT will use the better quality codec (vp9) by default. If you don’t get a lot of average views, they use the lesser quality one. They might even later switch it to a vp9 version without you realizing, if the video becomes popular. Now that’s only a theory – I say that because I’m sure I wouldn’t have qualified for vp9 when I uploaded that Ignis vs. Turtle video, but for some reason it’s vp9 codec’d. Regardless, if you’re someone who rarely gets many video views, the only current reliable way around this is to always upload in 1440 (“2k”), which seems to default to vp9 no matter what. 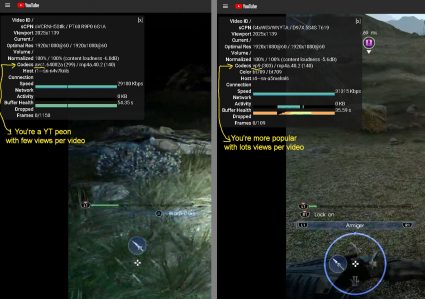 I don’t know how long they’ve been doing this, but years ago all my pc gaming vids used the avc1 codec – I checked – and still looked good to decent at 720 and 1080. Newer videos using it now look like muddy crap (imo), particularly with fast action motion, no matter what bitrate/compression you use.  So they must have reduced quality settings of that codec as well.

From YT’s point of view it may be logical in some way but it sure is annoying to the uploader. I wish they’d at least allow low-view accounts to have the vp9 codec if the video is very short (like under a minute)  or relatively small upload (less than 50MB) which wouldn’t take tooo long to re-process regardless.

Oh well, at least I know the reason now and can stop obsessing over editors, compression techniques and the like. If you now want better looking videos on YouTube, record and upload in 1440. Got it.   Edit: I tried upsizing a 1080 to 1440 and uploading, doesn’t seem to work, YT won’t recognize it as 1440.

I mean put both of these at 1080 and then full-screen, and see the difference. It’s not only motion, look at the weapon selector text/graphic and such. No these videos aren’t special, they were just good fast-motion tests.  I still think below 1080 looks like crap on anything but small resized windows or mobile phone screens, even with uploading 1440. 😛