This is a “blog” rambling post, if you’re here for FFXV pics, feel free to ignore.  😛

This is my current desktop setup.  I have a 43″ 4k TV, one 27″ 1440 monitor and one 27″ 1080p monitor. Most of the time now I run all three on the main Win10 rig but occasionally plug the 1080 into my older, rarely used Win7 rig when I want to do something on it.  At some point I should probably set up remote desktop so the only time a monitor has to be directly plugged into the old PC is if I wanted to play a game on it, but I digress.  (yes I always sit in very dim light like in the pic)

Point being, I was wondering the other night if I wanted to (casually) try Twitch-streaming again. A combo of light gaming+”just chatting” perhaps.  This thought is mostly a symptom of my recent boredom rather than anything serious, mind – maintaining a regular live-stream is a ton more “work” and setup than it may look like, and I don’t need income/am not at all interested in having a streaming career.  😛

Anyway, imo, you need three monitors to “properly” live-stream … yes yes you can do it with only one monitor if you really really want, but imo you need at least two, and three is optimum.  So I have that covered even if my desk isn’t wide enough to have them in an ideal arrangement….

The main setup issue I have is the mic.   I have a Blue Yeti. It’s this rather large, heavy thing.  Maybe I should buy a new/lighter one.  Regardless, I have yet to find a decent way to utilize such a mic in terms of placement.  Having it sit directly on the desk in front of your face was not ideal for me because it gets in the way whenever you want to shift/move your keyboard or whatever.  Not to mention a big mic RIGHT next to a clacky keyboard is never a hot idea (easier if you’re using a controller…).  You can buy a mic holder/arm extension, but almost all of them apparently use a C-clamp concept to temp-attach them to your desk  (example from Amazon). I don’t think I’d like that, since with the way I have things,  there’s no good place for it where it wouldn’t block a monitor view or I’d hit it with my arms or chair all the time.  Nor do any I’ve looked at have enough extension from their two “arm” sections to clamp onto the desk behind the central monitor to then reach *over* the monitor and then continue to extend even more to finally rest near/over my head. I like my monitors fairly high plus my desk is way too deep for that – it’s over 3 feet deep and most of the mic-arm/extenders seem to be about 15″-18″ for each arm section. Not enough. I’m not going to be drilling a permanent hole into my desk surface, either.  And I hate wearing headsets.

There’s only one wall-mounted mic extension I’ve seen so far (well, on Amazon at least) but again I’m not sure it’s enough reach to where I’d want it, from the wall stud I’d have to mount it to. I may have to try it tho. There are floor-stands of course but those generally aren’t for placing the mic over/next to your head.  I don’t care about uber quality live-stream mic sound, but it is important (to me) that you can move/change positions a bit and have it not drop in and out constantly, that you don’t feel like you have to shout all the time, and that it won’t pick up crazy/mega-loud amounts of other noises outside of your voice. Maybe I’m too picky. I get like that, making extra “work” for myself.  I could just use a cheap, crackly, muted-sounding, crap mic clipped to my shirt, right….  pfft.

I’ve been spending a lot of time on YouTube lately, watching film reviewers, “people reacting to something” videos, and linguist/accent analysis videos. Also, plenty of entertainment stuff like SNL skits and talk show snippets. I came across a short interview with Adam Driver on Stephen Colbert’s show (Adam is a cutie btw) and in the middle of it all of a sudden …

I laughed hysterically almost immediately, because you know what it instantly brought to mind?  This: 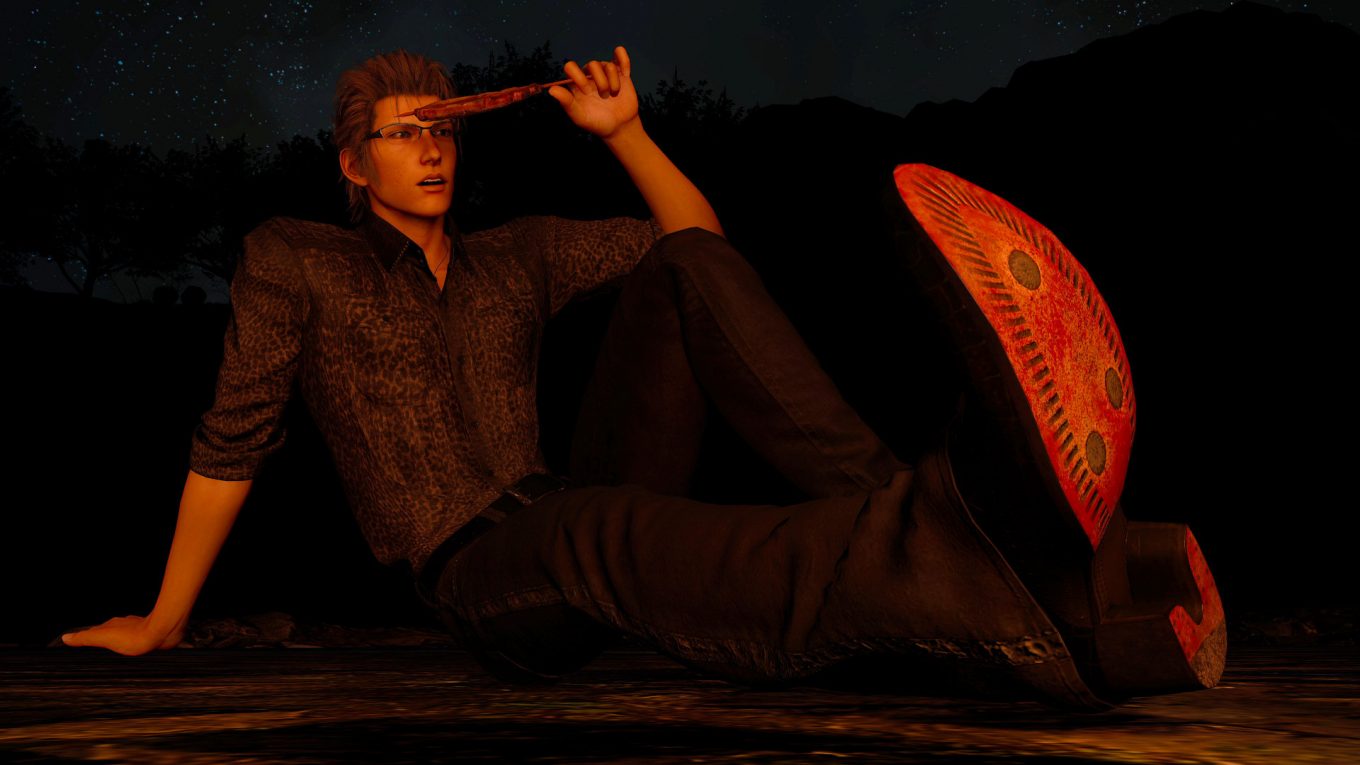 I had a pic of all the bros camping where you could see the red soles, from the ol’ forum-thread posting days, but I couldn’t find it in my 2,349,104 files so there’s this other old one instead. 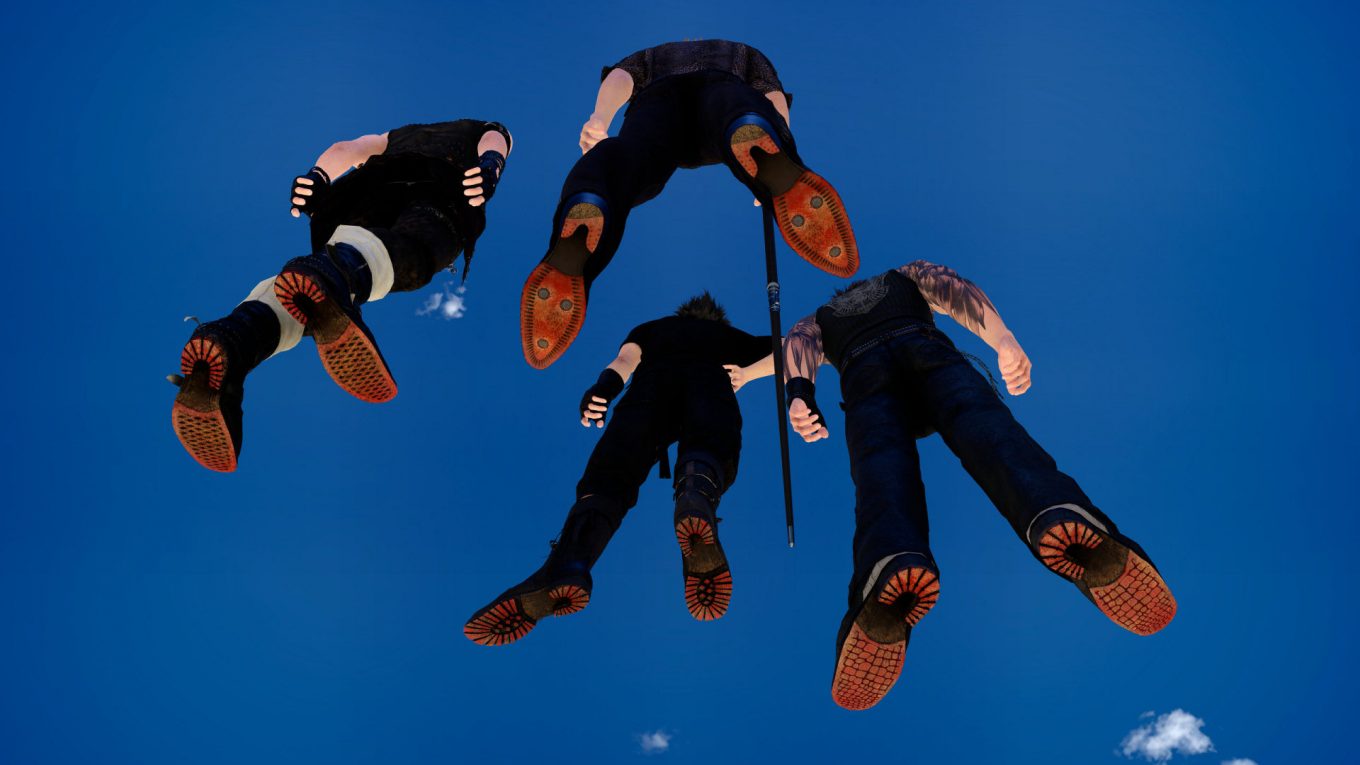 Paul Rudd can do no wrong.
It’s an old video but I still watch it now and then and it always makes me grin. That snapping arm swinging dance motion he does at around 5:15 in the video? Super sexy. Don’t ask why, I can’t tell you. It just is.

Also, since I was a teen in the early and mid-80’s, Rudd and Fallon’s MV recreations are so awesome. 😀 Rudd does the singing, too.

I wonder if I should install/start a “stuff I like/makes me laugh etc” review/ruminations blog.  As bored as I am in the wee hours, I might post to it quite often these days. I used to do “it’s my life” semi-journal blogs in the way past – I’m no longer interested in that sort of thing. Writing about entertainment thingies that I like (or dislike), however …I might get into that again. Plus it’d be a way to keep all such things in one place, for myself.

Finally found/adapted an adequate “stars” background to use with the greenscreen feature (so many nightsky photos/artwork are too decorative…). Works well to cover the whole area or partial. It’s nice for those times where the daylight distant textures look bleh, or when I don’t want a flat solid color field. Altho, I should probably give it a more gradual darkening so it’s not as even.
These aren’t awesome screenshots, just cheap examples of what I mean. As a bonus, you get the brighter or softer daylight shaders on faces vs. yellowish filters or that harsh blue bro-night light. So mostly I’ll probably use a darker grey and this starfield for greenscreen-ing, now.

It’s almost Christmas – not sure if I’ll take a FFXV break or not. Hubby and I may get wrapped up into some stuff between now and New Years. Plus I did buy a couple new games (Resident Evil 2 remake, Planet Zoo) … may try those for a while. Maybe.

Not all of, but maybe half of my current cut-outs. 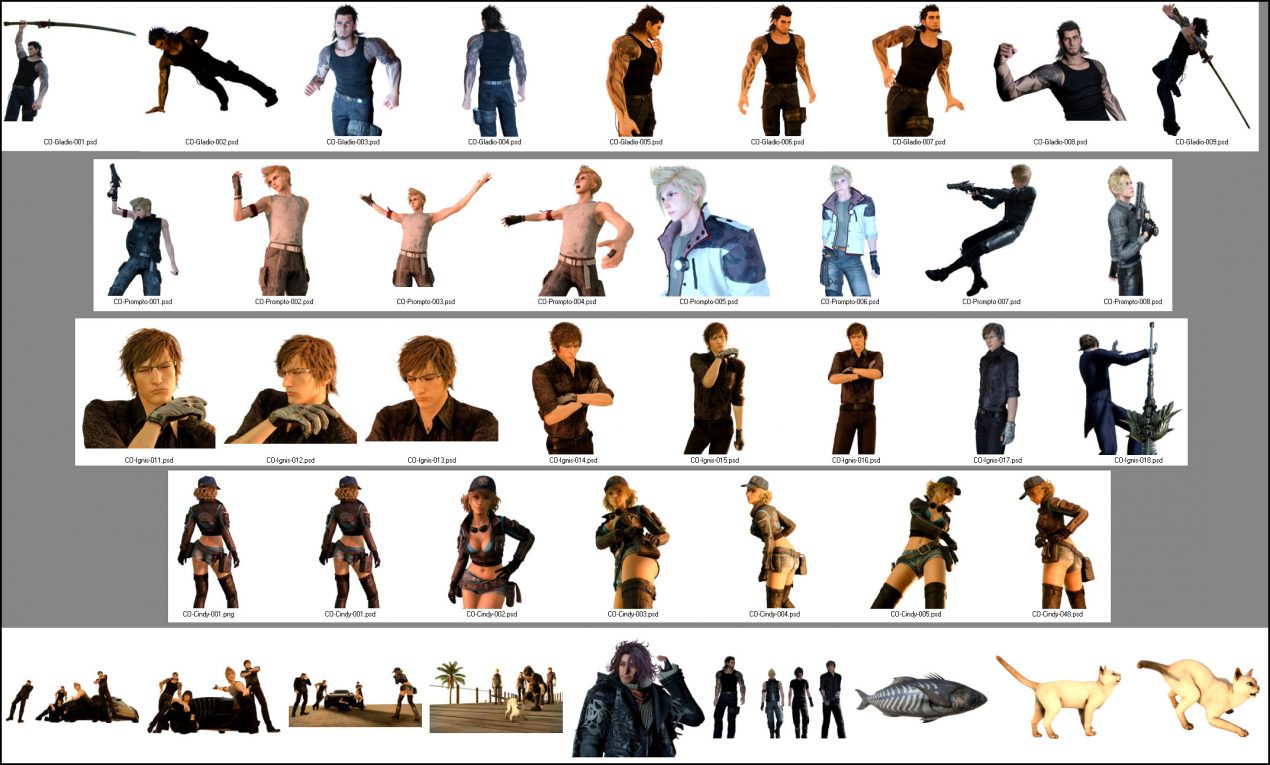 Now imagine dozens of “greenscreened” shots like these every time I turn on the game for 30 minutes:

Once every couple of days I might work on a couple at a time. Or at least sift through and see what ones I might want to cutout for whatever reasons and set them aside somewhere. It’s a long haul and continuous thing.

At the moment I’ve been rather distracted by checking out GooglePlay on the Tab-A tablet. All the watch ads or coins systems “free” games. Digital jigsaw puzzles (all the fun, none of the table-space-mess), mobile action-rpg’s, visual novels. Most are trash or too annoying re: ads/”buy rubies!” crap but some are decent time-wasters. Also bought FFXV’s Pocket Edition, at last. It’s actually pretty good, for mobile, although using the touchscreen becomes tiresome after an hour or so. However I can see why mobile gaming (ads/micro-transaction annoyances not withstanding) is such a big thing now. You just have to sift through a ton of idiocy to find the decent ones.

… you wake up in the middle of the night, can’t go back to sleep, and are really bored. 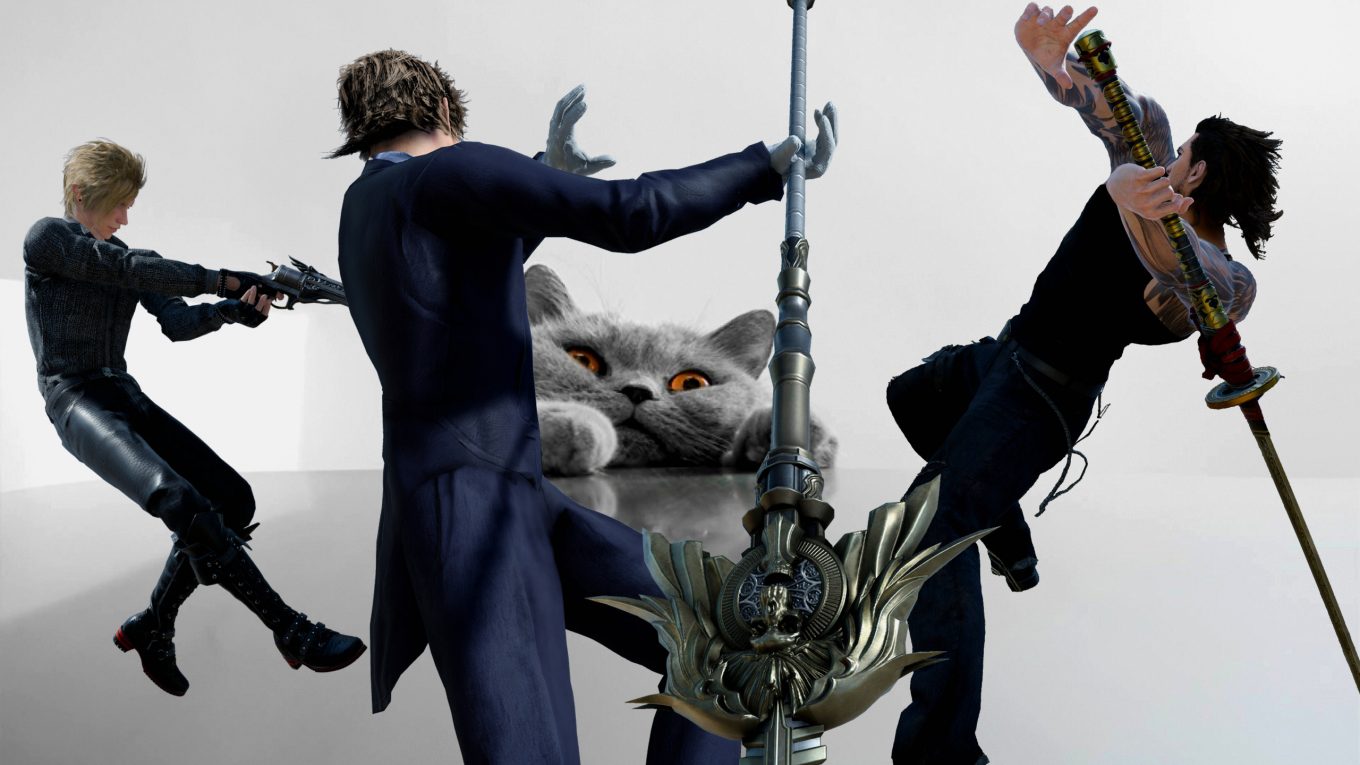 Blog: hubby tossed me a Galaxy Tab-A 10.5″.  Freebies/cast-offs from clients. I didn’t have a cellphone until he gave me an old Samsung S5 a year or two ago (and more recently a S7). I only use the phones as mini ‘net browsers with home wi-fi, no cell/phone service. Anyway, I mention it because my device wallpapers are all currently of Ignis and hubby likes to make fun of me for it. If I leave one in the garage he may enter my pc-room with it and tell me I forgot my boyfriend. 😛

Although since I now have the big tablet, I may change the phones to some anime ones soon.

This is not transparent/a cut out. But it’s showing the full size. See all those 1 to 2 pixel wide strands of hair? Yeah, it’s like that. I use 500% magnification most of the time. 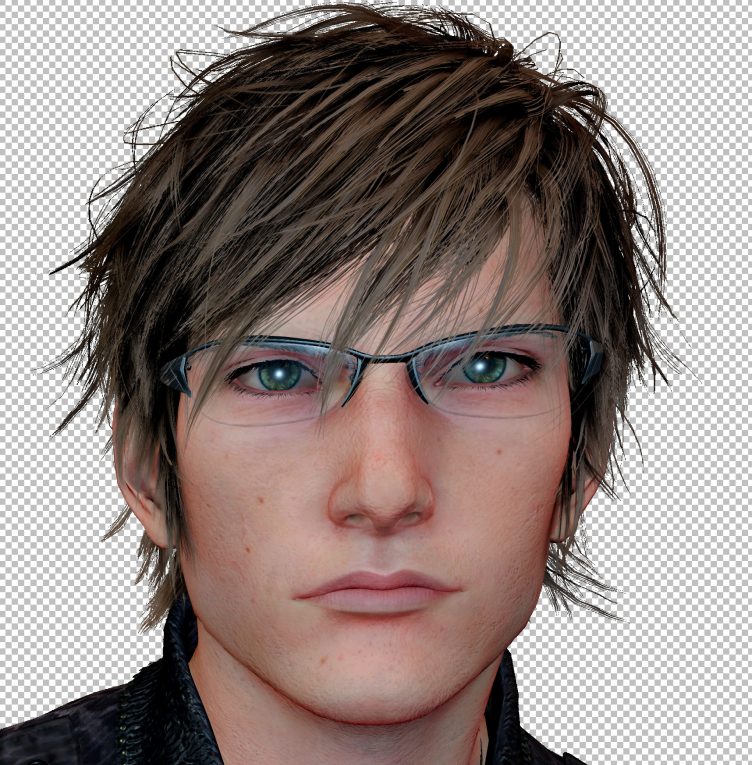 I made my own grey and beige greenscreen colors for screenshots that work much better. Doesn’t color-bleed into the hair, like Nvidia’s uber bright blue, green, purple etc. does, making it easier. Still, took me 3 hours to get his hair clipped. Problem is, I’m super picky. Or just obstinate, or both. 😛  So three examples of this cut-out on random stuff. Still not perfect on black background but it’s tolerable/you can work with it.

The last pic is … well don’t ask. When their heads are smaller you don’t have to be as precise about the hair.