It was asked in a comment but I’m going to reply to it here:

I’ve tried to do this before, because I think it’d be awesome to Ansel, too, but the thing is, it’s quite rare to get the block chance against Adamantoise. You can stand and run around near/under his head for an hour and never get it to happen. I have no idea if there’s some special trick to it, but I think it simply has a rare chance to proc – a special easter-egg type thing. Even harder/more rare than that one block/parry against iron giant’s where Noct will run up the demon’s sword edge.

So one day it might happen in the first 5 minutes by sheer luck…but most of the time it just isn’t going to occur. While the big turtle doesn’t do much damage against high level bro’s, standing under its chin for hours gets pretty dull. And to get a lot of shots from it I’d have to try to make it proc more than once. >.>

I’ll keep trying now and then. Maybe I’ll get lucky at some point.

I had to uninstall then reinstall an updated version of the comment plug-in I use, but it seems to no longer conflict with adblockers.  Also, unrelated, I think you don’t have to use the IMG tags to insert a linked image into the comment field anymore. If you simply cut-paste a direct image hyperlink/url, it automatically displays as the image when you hit Post. At least with .jpg extensions, didn’t test anything else.

And since it’s not a pic-blog without a pic … 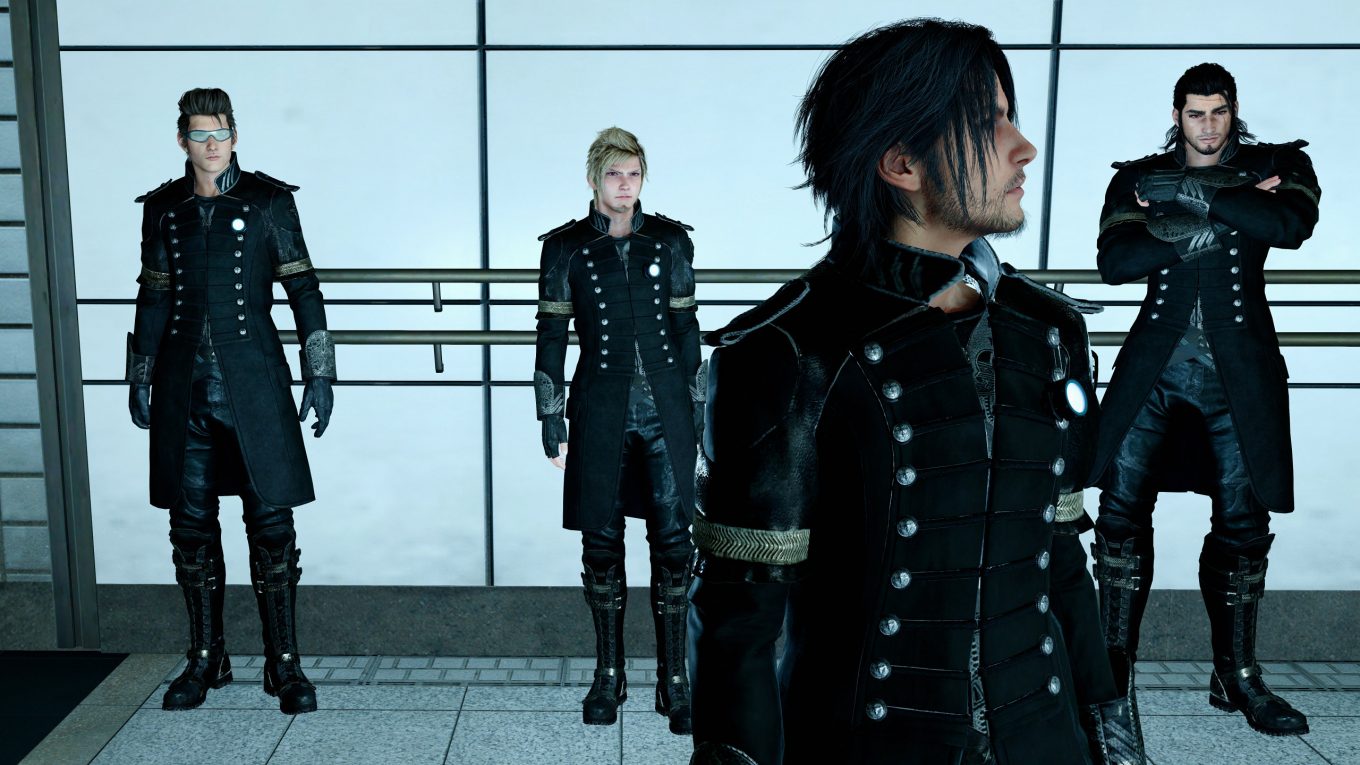 Apparently the “post” and other function buttons are no longer showing up for some people when you try to write/post a comment. I haven’t looked deeply into it but on Firefox, using adblocker addons seems to block them, and disabling the adblockers makes them appear/be usable again. I checked UBlock-Origin and AdblockPlus and while using an older version of Firefox and the latest version of Firefox. I did not test Chrome since I don’t have it installed/won’t install it.

I don’t have any ads on the blog (or anywhere else on my domain) so I can only assume the WP plugin I use for commenting ability is utilizing something that is on one of the adblockers “lists” for some reason.  I may try to find another comment plugin when I’m not feeling lazy or go back to the default WP comment. The main reason I started using a plugin was for a few features for users to use and to make managing comments a bit easier.  There generally aren’t many comments to begin with. In the meantime if you’re using adblockers you can temp disable them to see if that works. If you wish. Cheers. 🙂

I was wondering how well the built-in WordPress media players fare. Seems to work with Win7, Win10, and Firefox 61+ but I have no clue about other or older browsers. If you r-click on video while it’s playing, you can pick things like Loop, playspeed, etc. The audio player doesn’t seem to have those options.  For really short video snippets – like that V drinking coffee one – it might be nice to not have to use YouTube, but I don’t have 200,001TB of server storage to be able to often upload lots of long/large videos. Plus I’m not sure how much the media containers affect load time of the website. So this is mostly curiosity/testing. There’s probably some free/paid WP plugins that work better, of course, but not sure I want to go that route unless I was going to devote a site to videos.

Uploading audio occasionally is more likely. For testing laughs, here is a stupid song mix I made years ago, using Boone’s voice lines (Boone is from Fallout:New Vegas). I recall liking it when I made it but now it sounds overbearing and silly. lol.

But I wouldn’t mind making silly projects again, using voice files,  with FFXV stuff.  I’m that bored lately, yup. The problem is converting all the audio files into mp3’s vs. their original uncommon format. I don’t currently have a tool that can do them all wholesale. Last time I looked at them I only converted a handful of Ignis’ lines then gave up. 😛  Need to look around again.

My complaint about adding double-spacing directly underneath posted images seems to be a combo of WordPress AND Theme related. I can’t even hit Enter (does nothing) in the Visual Editor if I try to put the cursor right “under” the image. It’s a WP obsession with using Paragraph maybe. If I make the image “center aligned” (using WP’s default media/image options) it places text double-spaced underneath. But if it’s Left Aligned, like I prefer, it does not. I’ve also tried inserting coding in the theme’s CSS box to increase empty space “padding” around an image to create space that way,  and it still didn’t stick – probably because you have to change something else in 10 different code places or some such and if you aren’t the creator of a theme/software (and not a current expert at web coding) it’s like hunt and peck typing trying to figure out what controls what in order to try and change it.

The one thing I haven’t tried is creating my own simple  (and outdated in terms of web creating) table to contain and pad the image but it wouldn’t surprise me if the theme I’m using would defeat that somewhere, too. TEST:

EDIT: Hah, table seems to work. I added the background color to the table so you can see the top and bottom padding effect. But then I’d have to do this for every posted image. And run the risk of a future software update making it NOT work and then all past entries might look borked.

I’ve also had issues re:  text wanting to “wrap” to the side of an image vs. appearing below the image, even if you hit Enter in the Text-Editor so it looks like there’s a spacing. You can force it to not do that but the point is, in my opinion, there’s definitely such a thing as too much “idiot-proofing” with auto-applied features…

F— this WYSIWIG/modern website/themes stuff.  Maybe I’m missing/not understanding something, I make no claims at being a webpage coding person (stopped paying attention to this stuff years ago), but the whole point of using something like WordPress is to make it easier for people who don’t want to be code experts – but the sacrifice is such often takes too much control away from the user, and I mean basic control. Making the “break” code not function , for example, WTF.  My question is why do companies like to remove basic stuff like that?

I’m half-tempted to go back to doing everything manually in HTML to create simple pages. I could be like the  Greatest Page in the Universe. Or using a forum instead and making new threads/posts instead of “blog entries.” I spent an hour and a half trying to find a workaround for something as basic as double-spacing after an image. I’m an old fashioned, control freak, cranky old woman and things like this annoy me. I’m going to run off and pout now.   😛

Final Edit: for a bit of brevity’s sake. .

…like I said in another post … maybe. I was originally going to wait until I’d at least decided if I was going to purchase the Ardyn DLC on or near release. No point in maybe burning myself out on the game again if I’m going to buy/play that DLC, I figure. But I’ve been kind of “bored” the past couple of weeks so I keep turning FFXV on for a few minutes here and there to remind myself of things. I already barely remember half the combat controls, haha. I still haven’t updated the game to the latest patch because I don’t want to lose the difficulty cheat table, and because I care nothing about Comrades. (EDIT – ahhh screw it, I’m updating the game now, can’t use Workshop if I don’t sigh)

Games I’ve been playing off and on the past couple months: Diablo3 on PS4 and 7 Days to Die-Alpha17 on PC. Mostly have not been gaming very much however.

Anyway, as much as I like Ansel and this game for screenshots, I’m sure I’ll keep posting some now and then, but it’ll still be unpredictable. 😛

Removed the individual bro Categories. Reason for this is because the “tags” and even a general Search work just as well for finding images of your favorite things, so Category felt redundant. Any images that focus only on one character in some close-up/pose-ish fashion will generally be tagged with “portrait” as well as character name.

Sidenotes:
As mentioned in the About/FAQ, some weeks I can/will rapidly post a lot of images (I try to limit it to 5-6 blog entries per day but…). I spend more time moving the Ansel-camera around than I do actually playing the game which results in dozens/hundreds of screens all the time (did I mention Ansel screenshotting is an obsession?). So tags seems the most effective organization method. Although I wish the sidebar tag-list widget wasn’t so awkward looking. I wonder if there’s a plugin to change only that. 😛 (edit – there is, ha)

The Category “Mods” refers to posts re: my trying out mods or other pc cheats. I gave up on trying to work with the user-unfriendly and very limited skinning mod-tool that Square released (so many modeling issues and forcing users to compile mods non-locally/online, BAH). When the level editor comes out I may try diving into that, if it seems interesting and doesn’t suck donkey balls to use. We shall see.