Did I do this before? I’m sure someone has done it before. I like the angle better than the one they give you in the actual title screen. He has a tiny almost-smile. 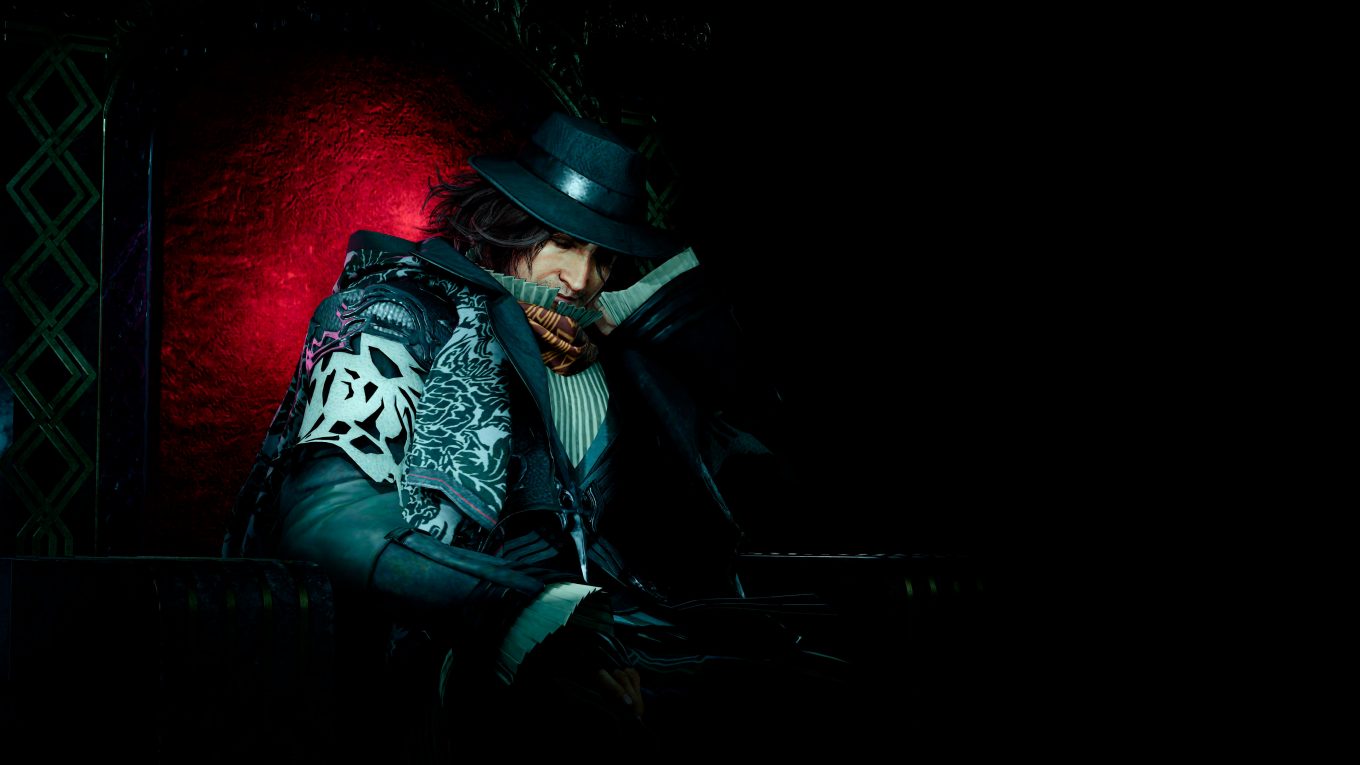 I tried to Ansel the other version of title screen, with Ardyn and his girlfriend, whats-her-name. But their legs/clothing are really awkward looking while lying under the tree when you try to pull out the view. There’s a reason they only show their shoulders/faces I guess. Pfft.

I guess that does work… has vague possibilities. 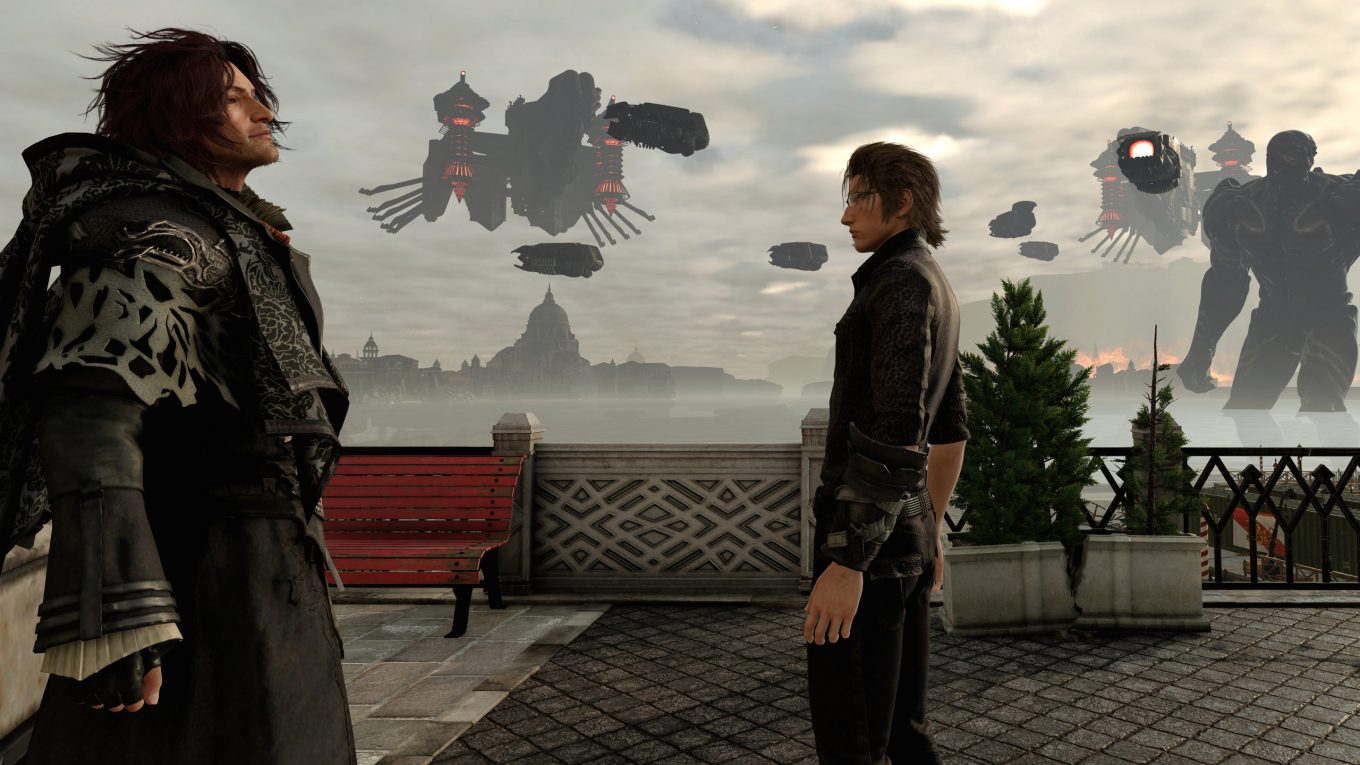 The DLC title screens are interesting to Ansel. Kinda. 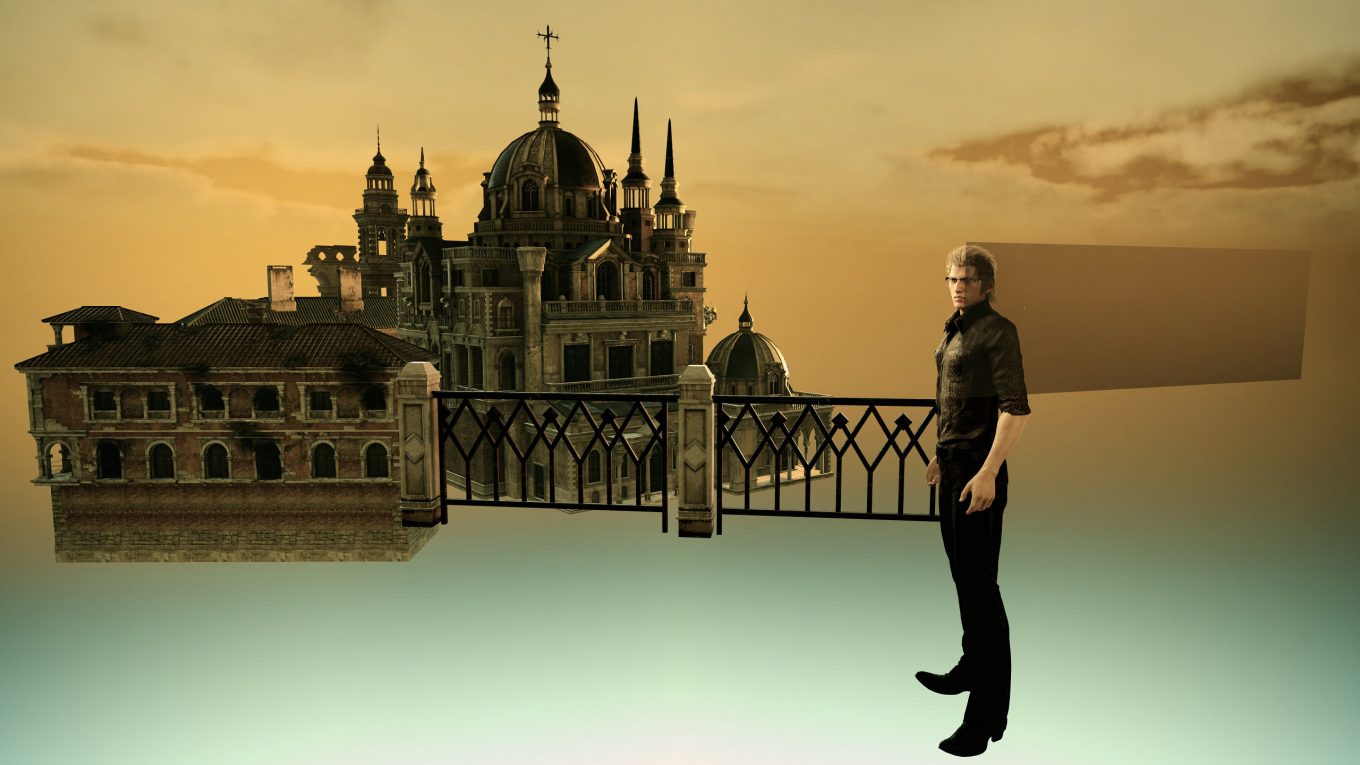 This is from Prompto’s DLC at the very very (very) end, where Ardyn observes Prompto driving away on the snowmobile. I “green-screened” it because the background mountains and snow looked like low-res poop. 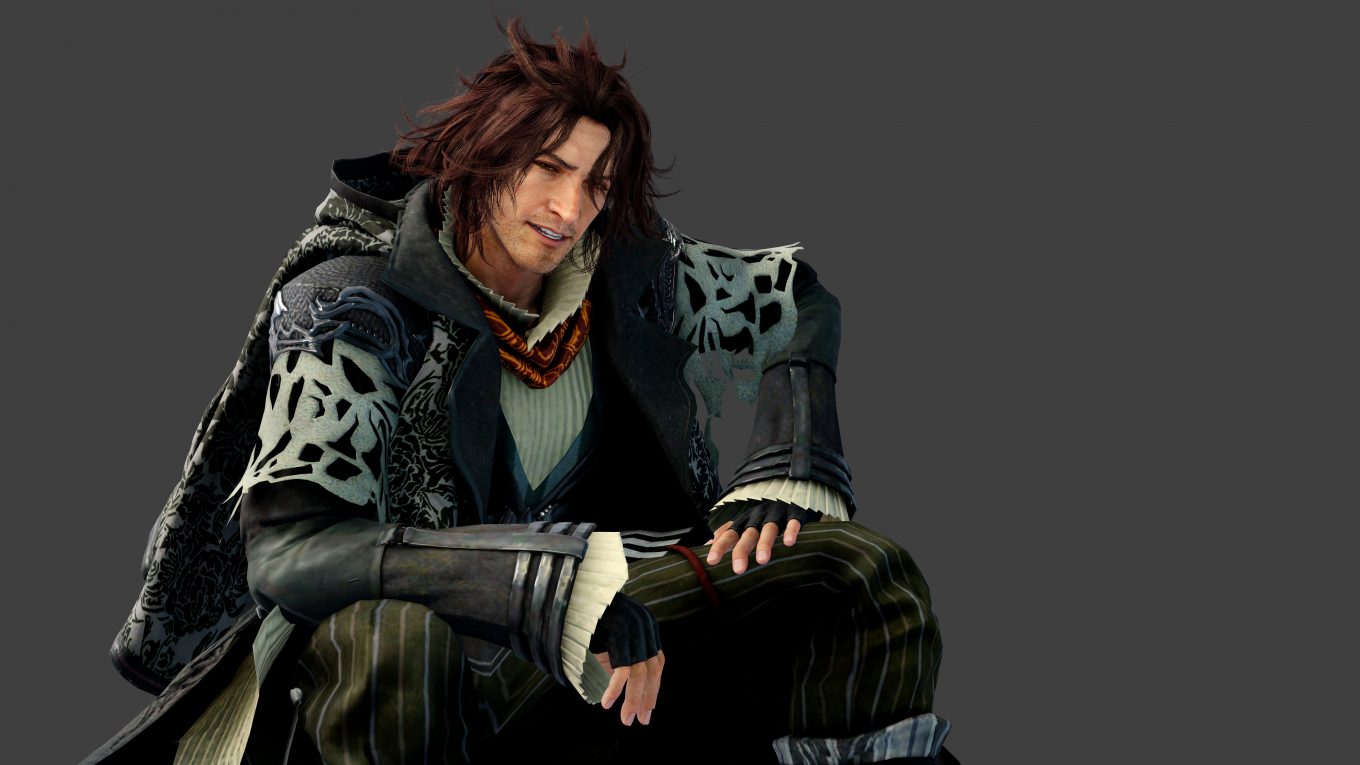 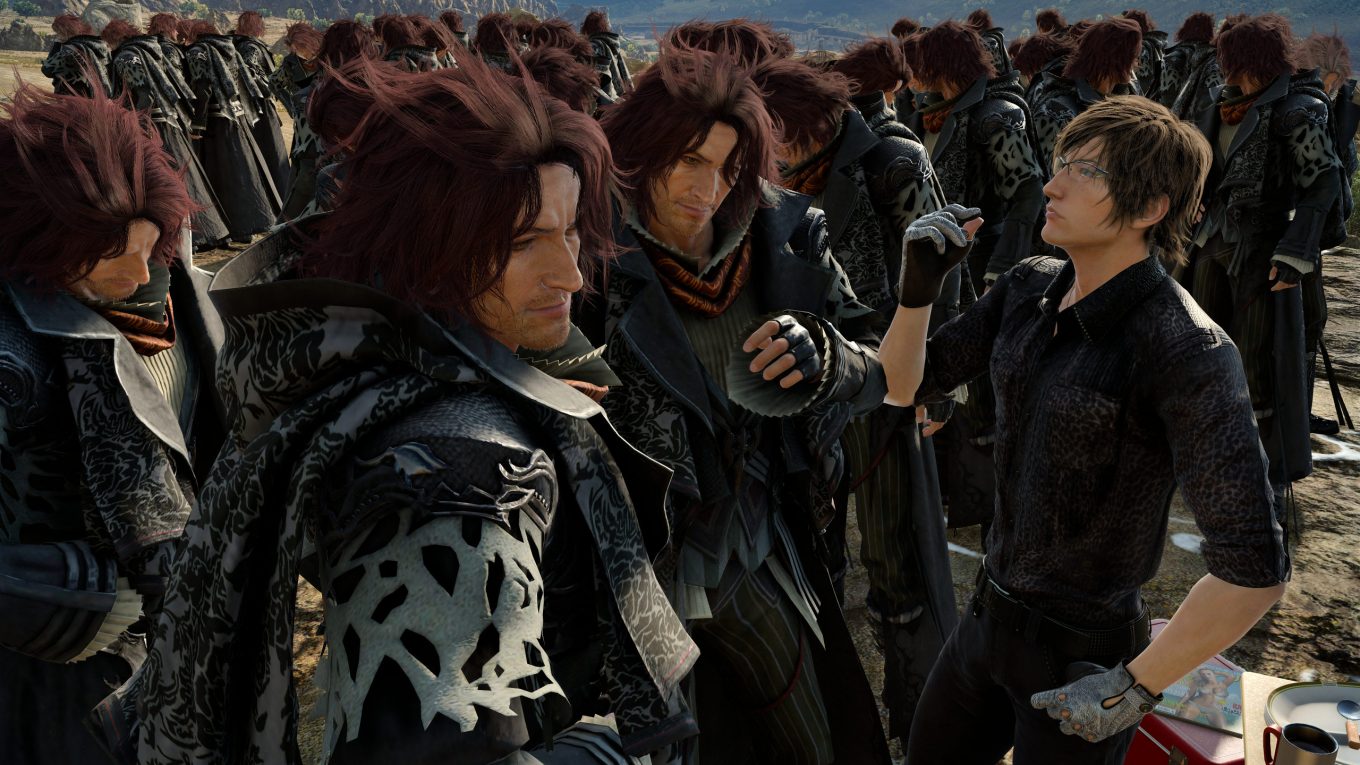 It’s a glitch that occurs if you’re using a Cheat Engine table to add Ardyn as a follower and then repeatedly use Avatara to switch Noctis appearance over and over. Adding this many WILL affect performance a lot. They do not follow you, and the duplicates do not remain upon reloading a save. But they do shuffle around and react to environment “spaces”, so you can bump into them to make them move if you wish, and they interfere with traffic and enemies will attack them, among other  things. It’s hilarious. 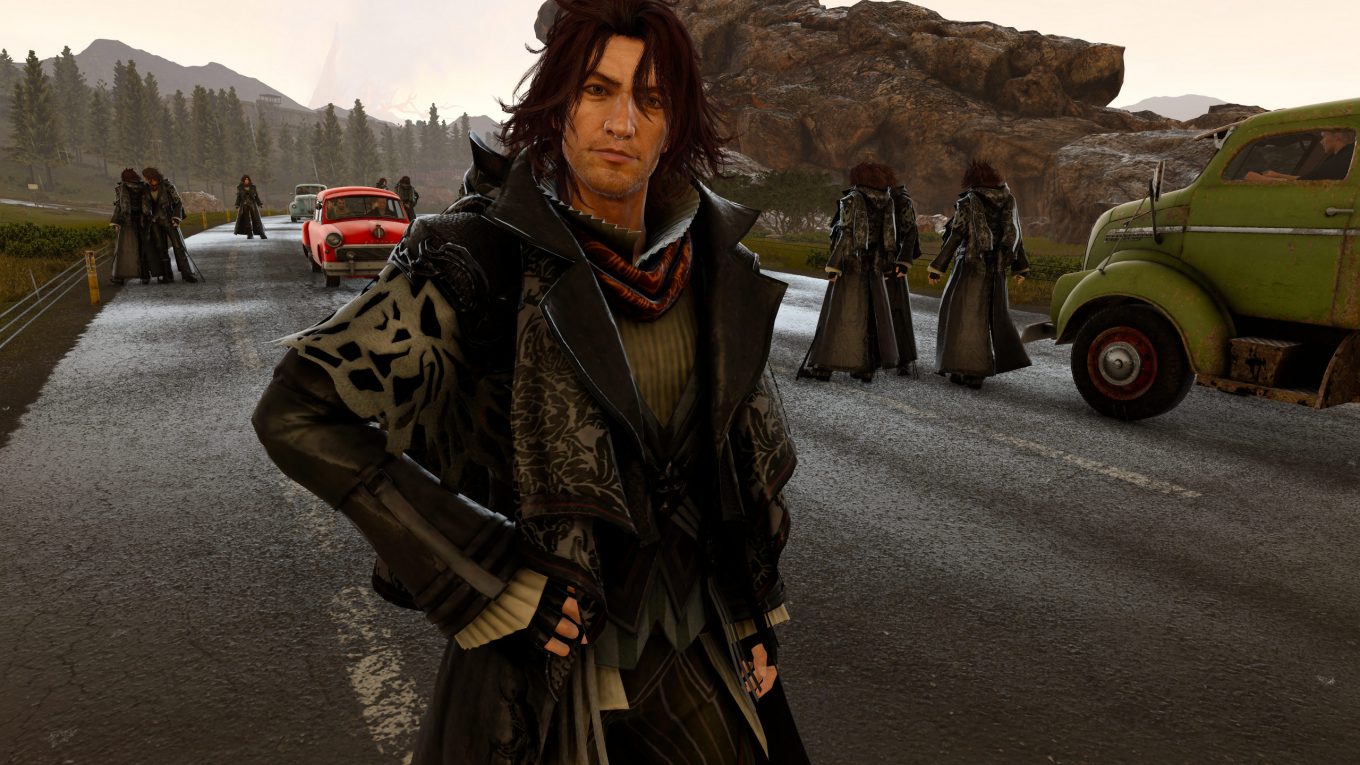 It also works with Umbra, but that’s for another day. 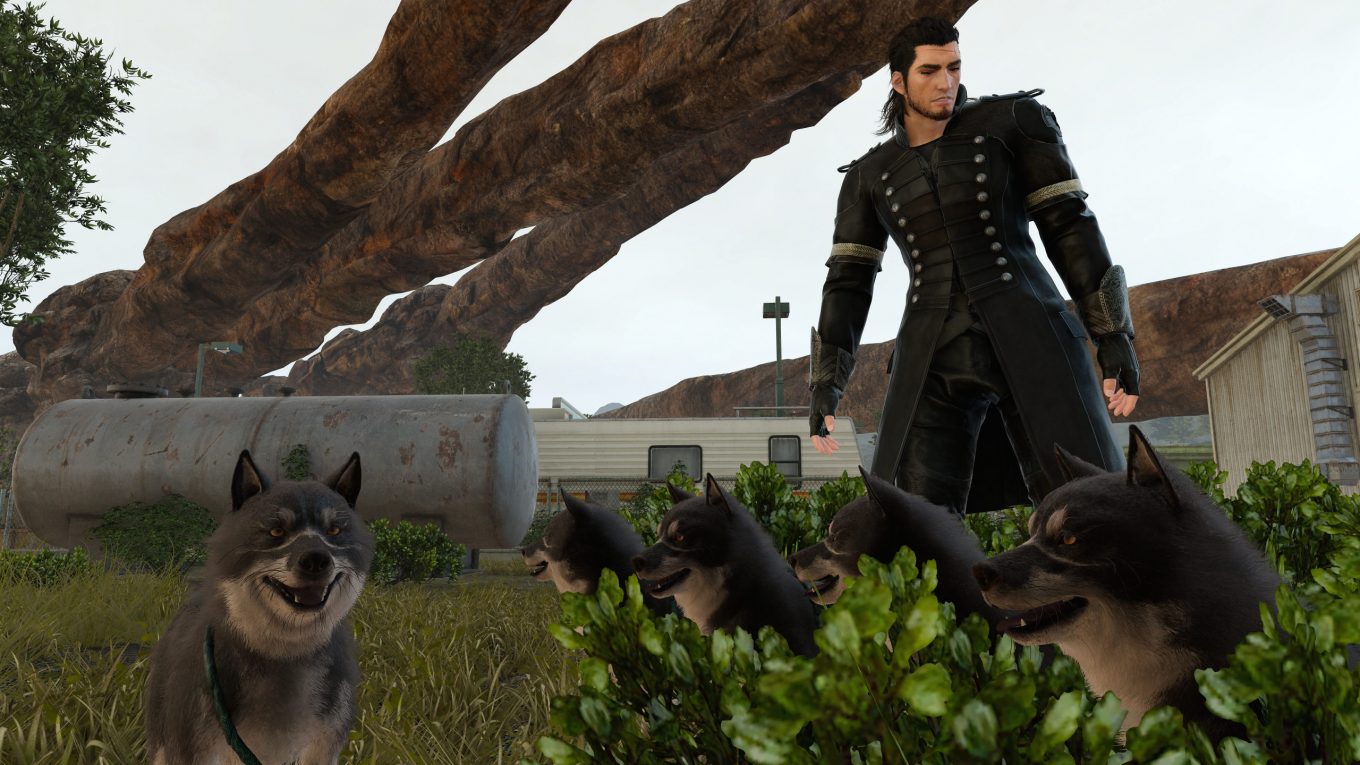 The first two are cropped out of 360 screenshots. 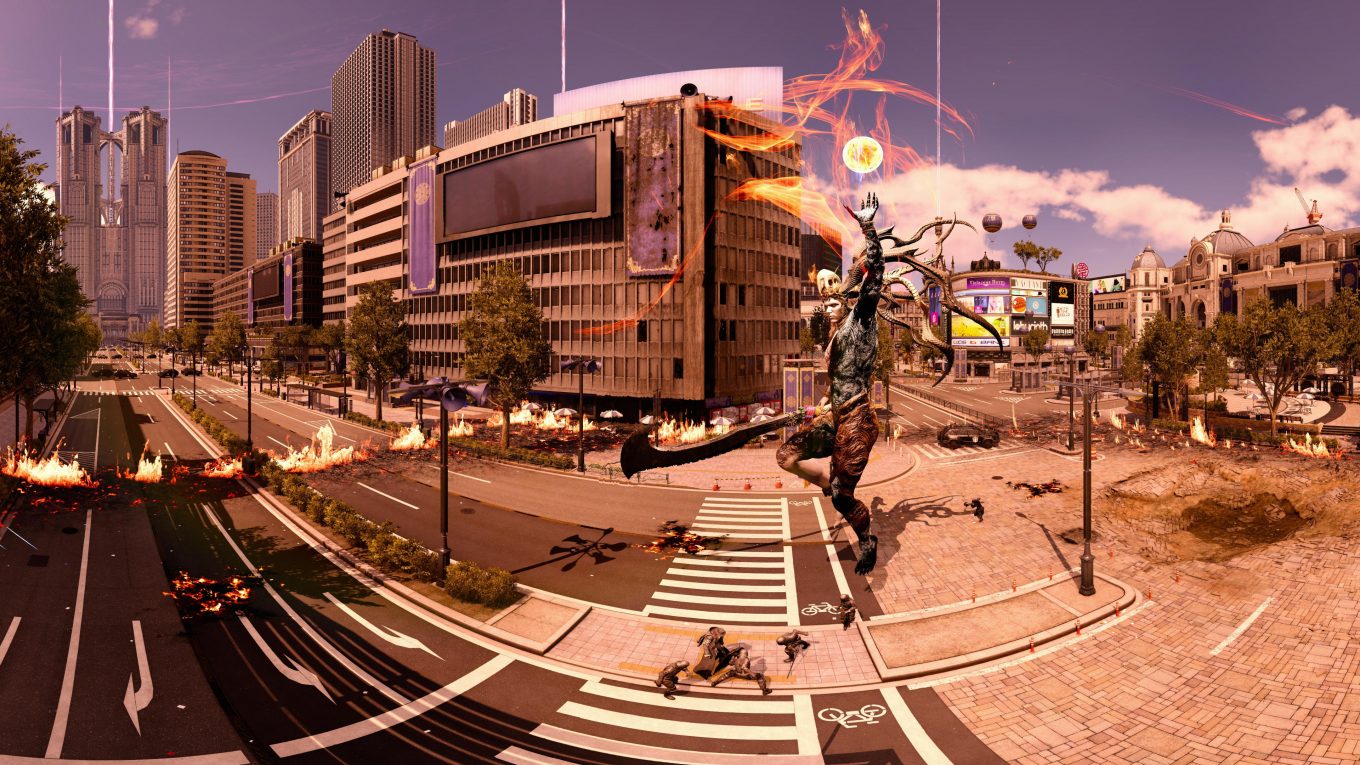 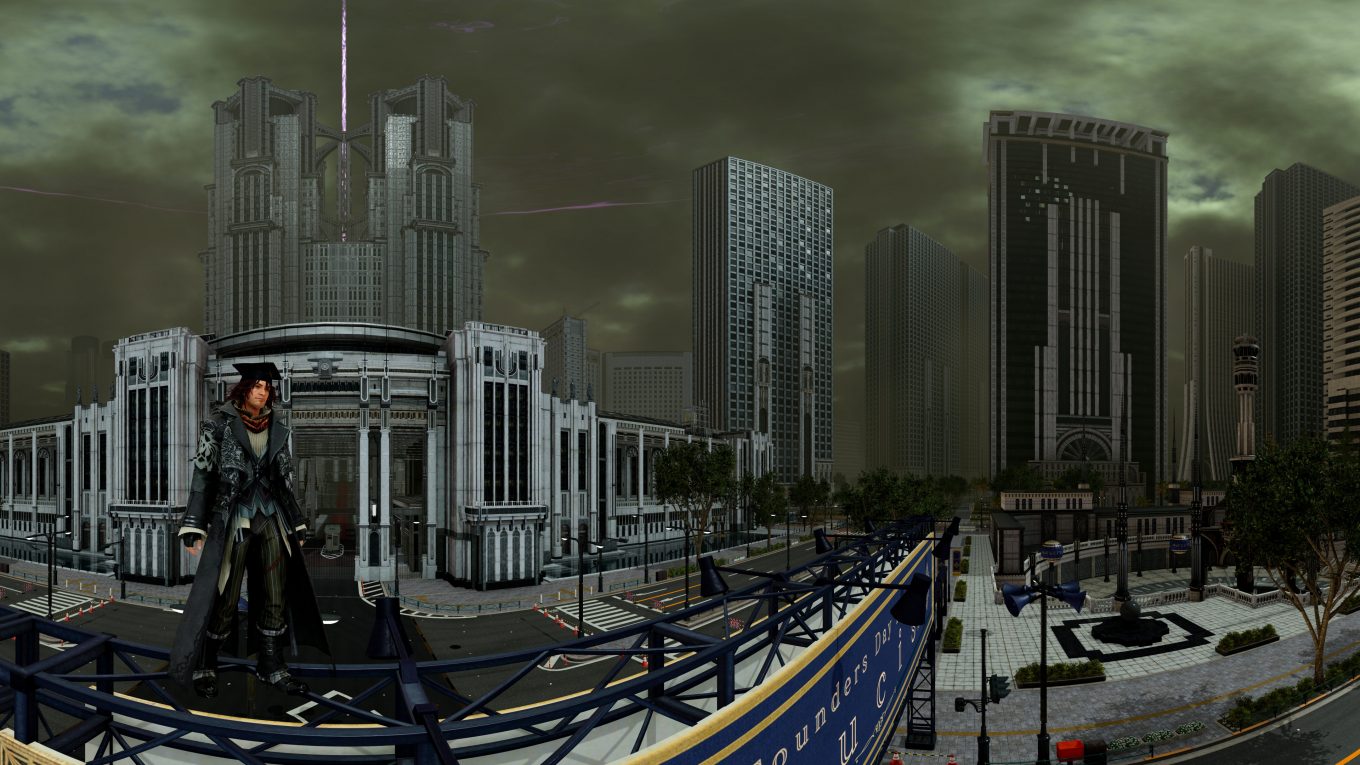 Ardyn holds onto his hat when he runs. Which is quite cute. 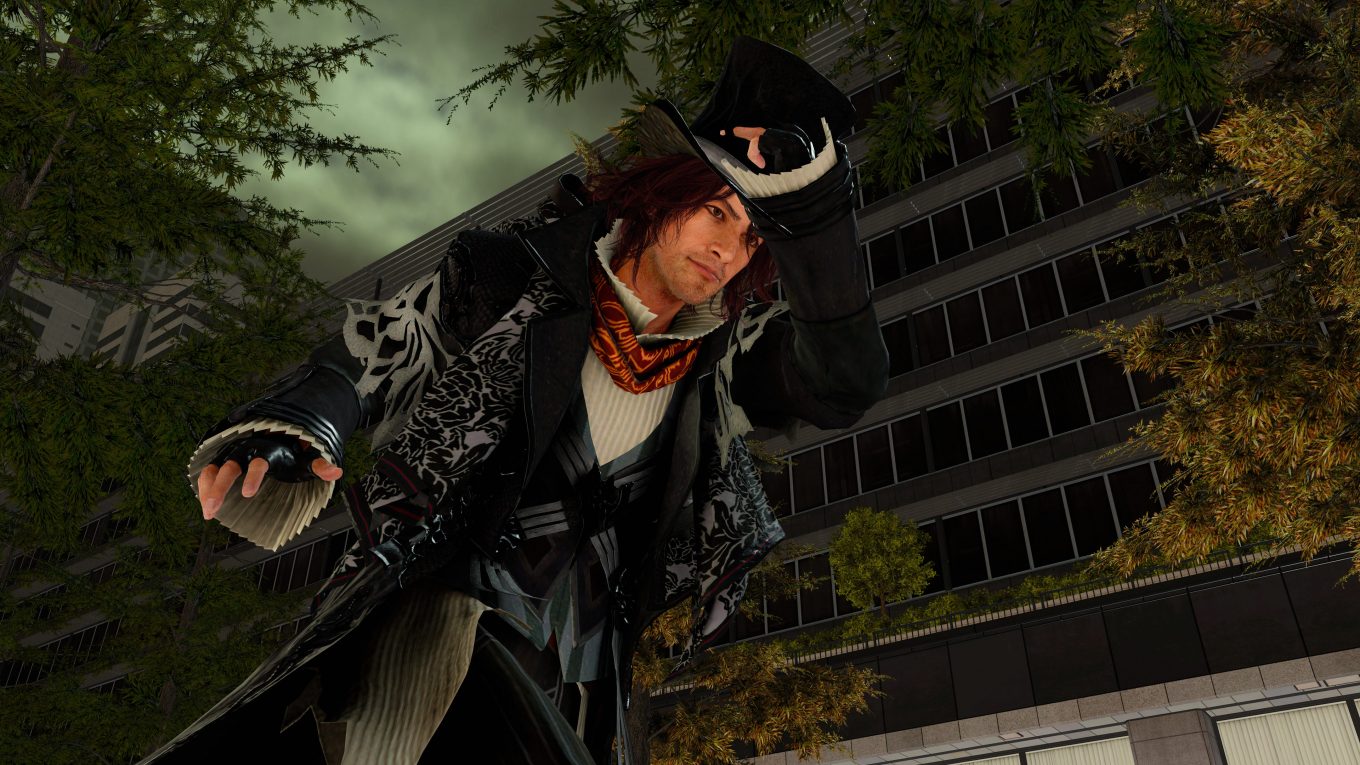 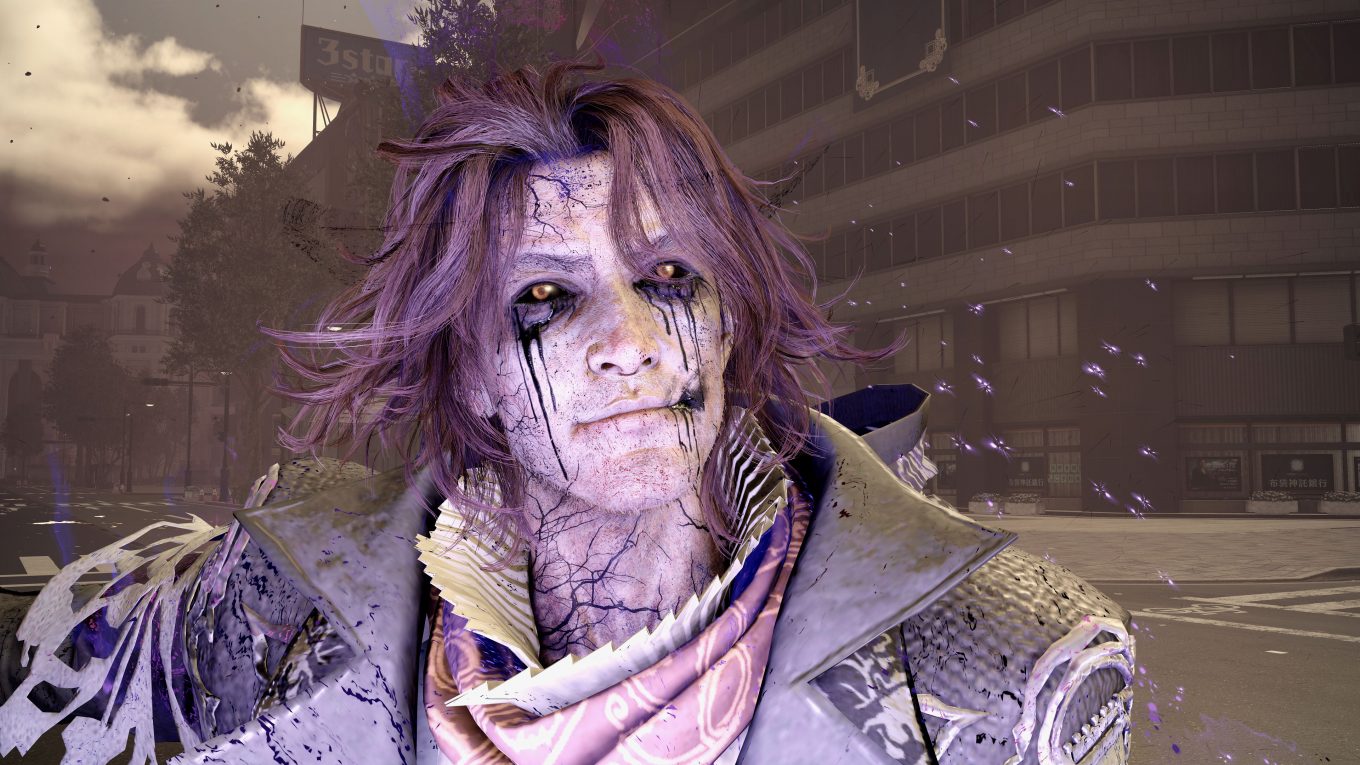 That cutscene moment where everyone took a screenshot, right? Well I tried to take something from other angles and micro-moments but … it mostly came out as weird squiggles… 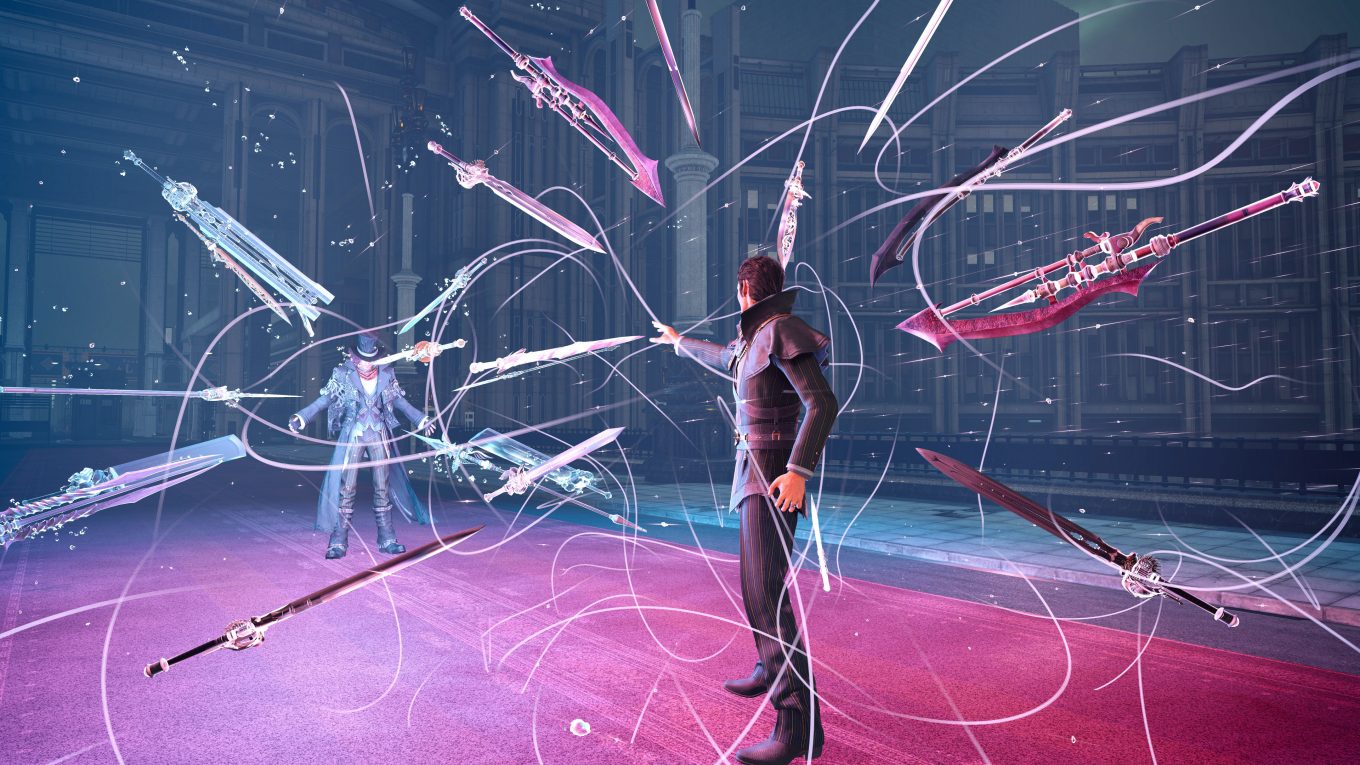 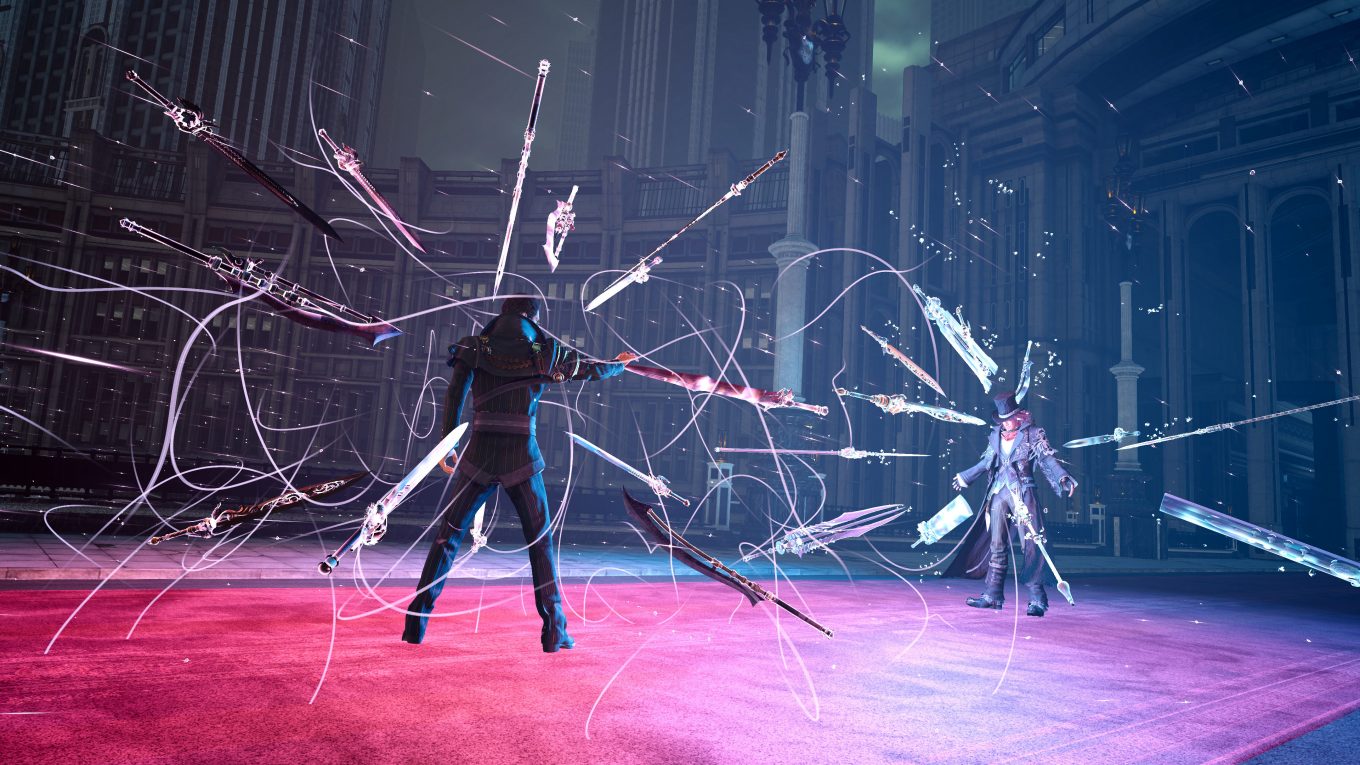 …or they were like this, Regis or Ardyn surrounded by swords. Basically I didn’t luck out to get anything really “cool.” Heh. 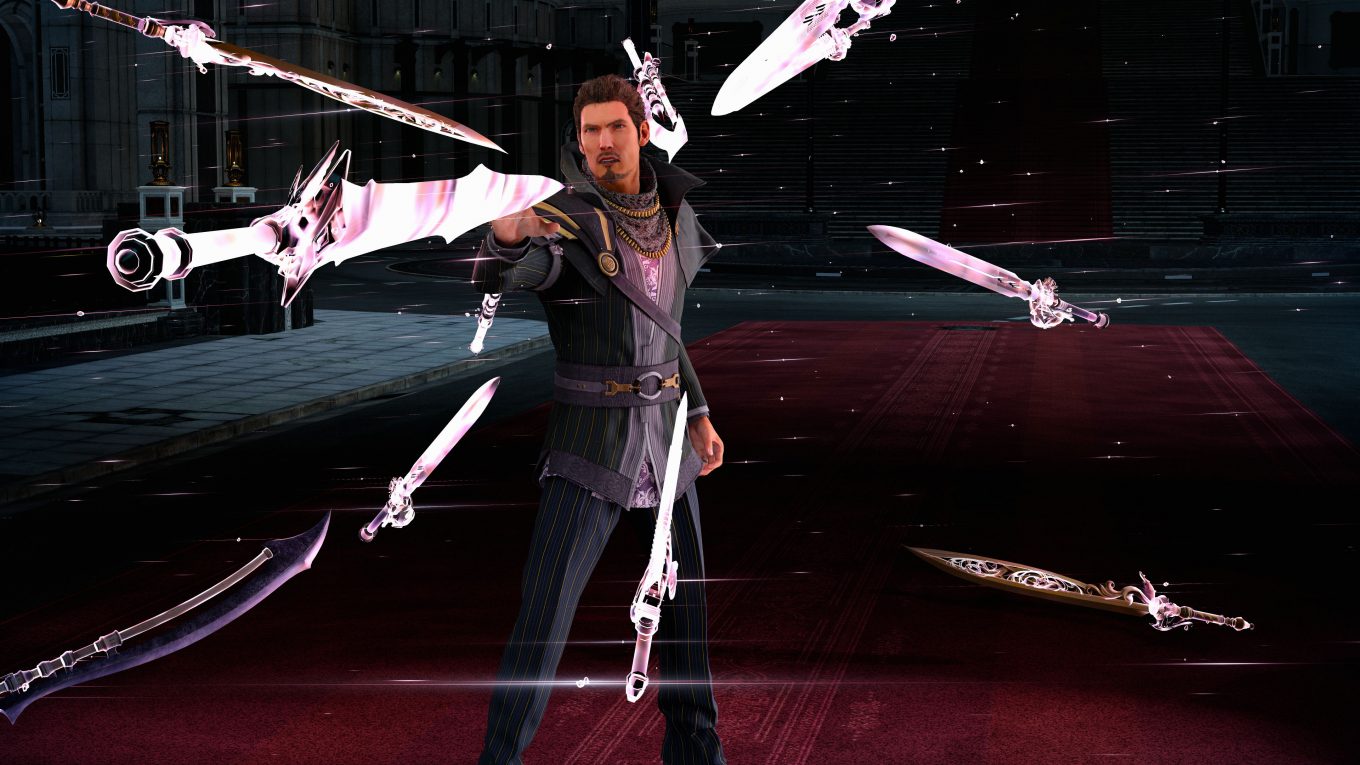 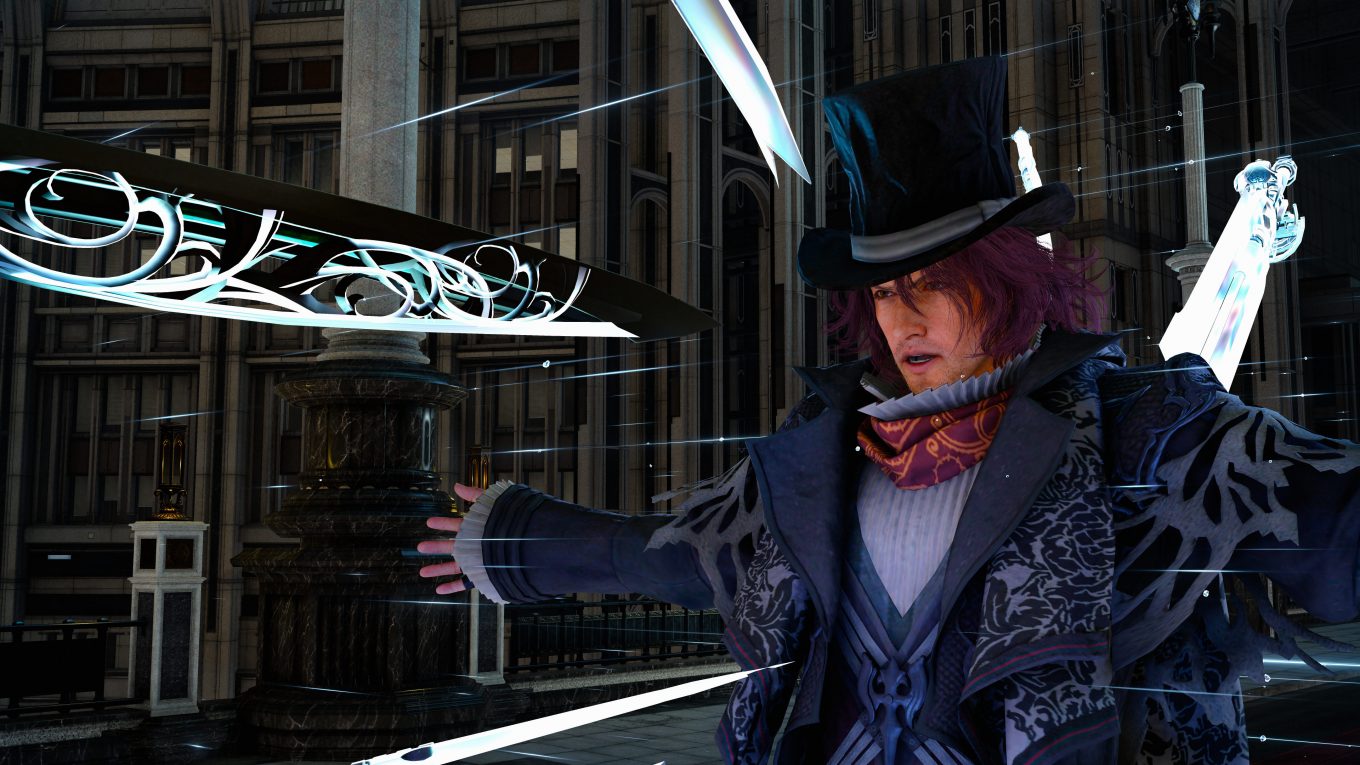 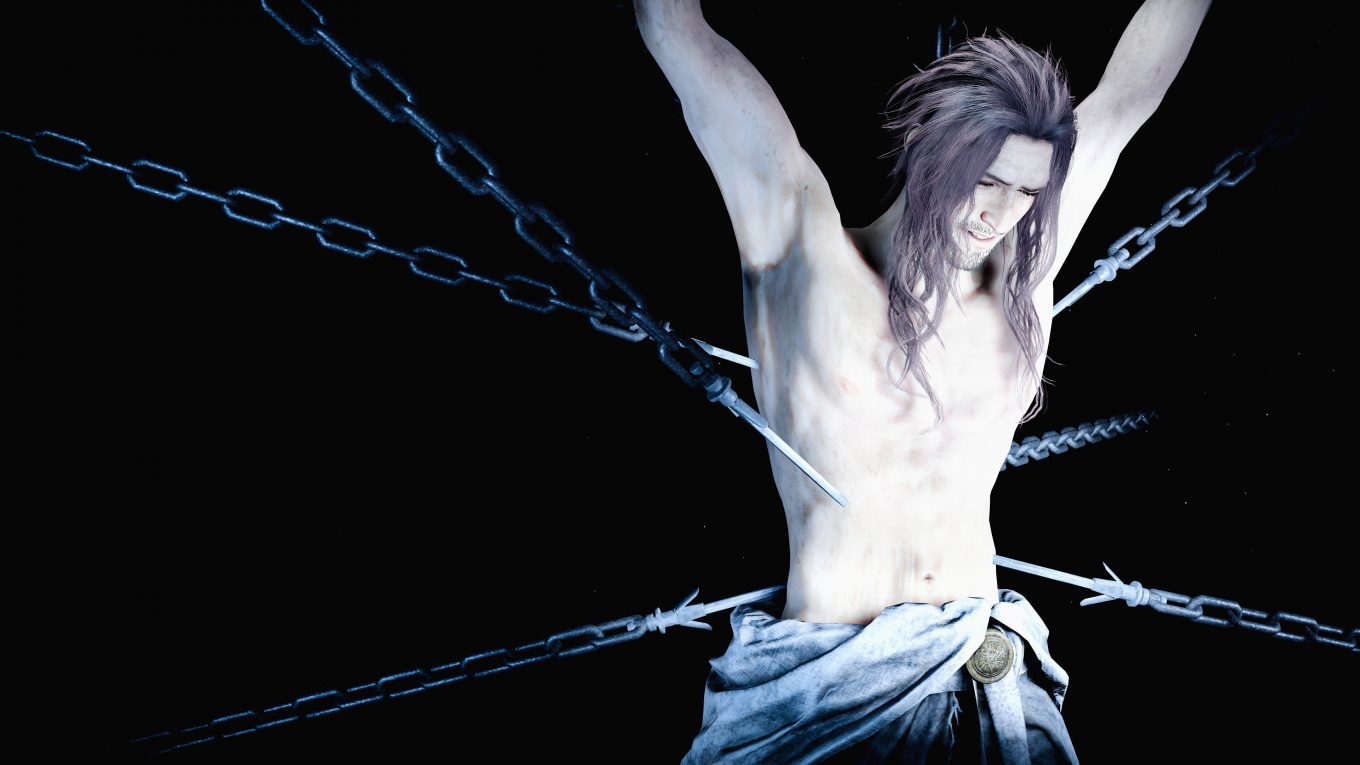 So if Ardyn is the Christ-like figure, what is Noctis? With all the lore dumping and hey, btw, the gods are arses, but wait, are they really or does it just seem that way, maybe the gods are as much at the whim of Fate and Destiny as anyone else – is anyone really a good guy or a bad guy in this tale? Well, I’m not even going to pretend to understand or waste my limited braincells trying to analyze what can’t truly be analyzed, because in games (and movies, and long running tv series), story can be story at any time for “reasons.” But hey! Look at that detail work in Ardyn’s torso! The belly button is almost photogenic! 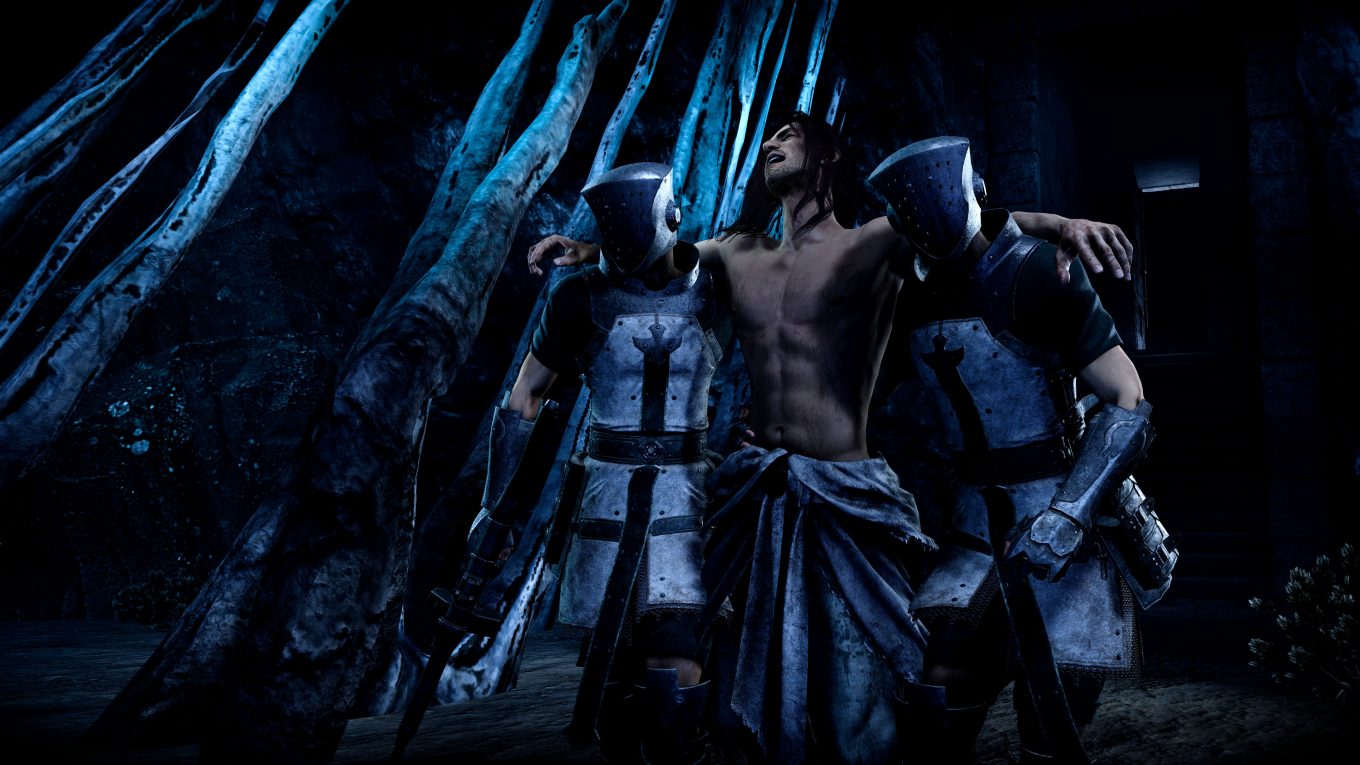 Is it the same as Gladio’s bellybutton/torso, only minus tattoos? I always leave Gladio’s shirt on, I have no idea. 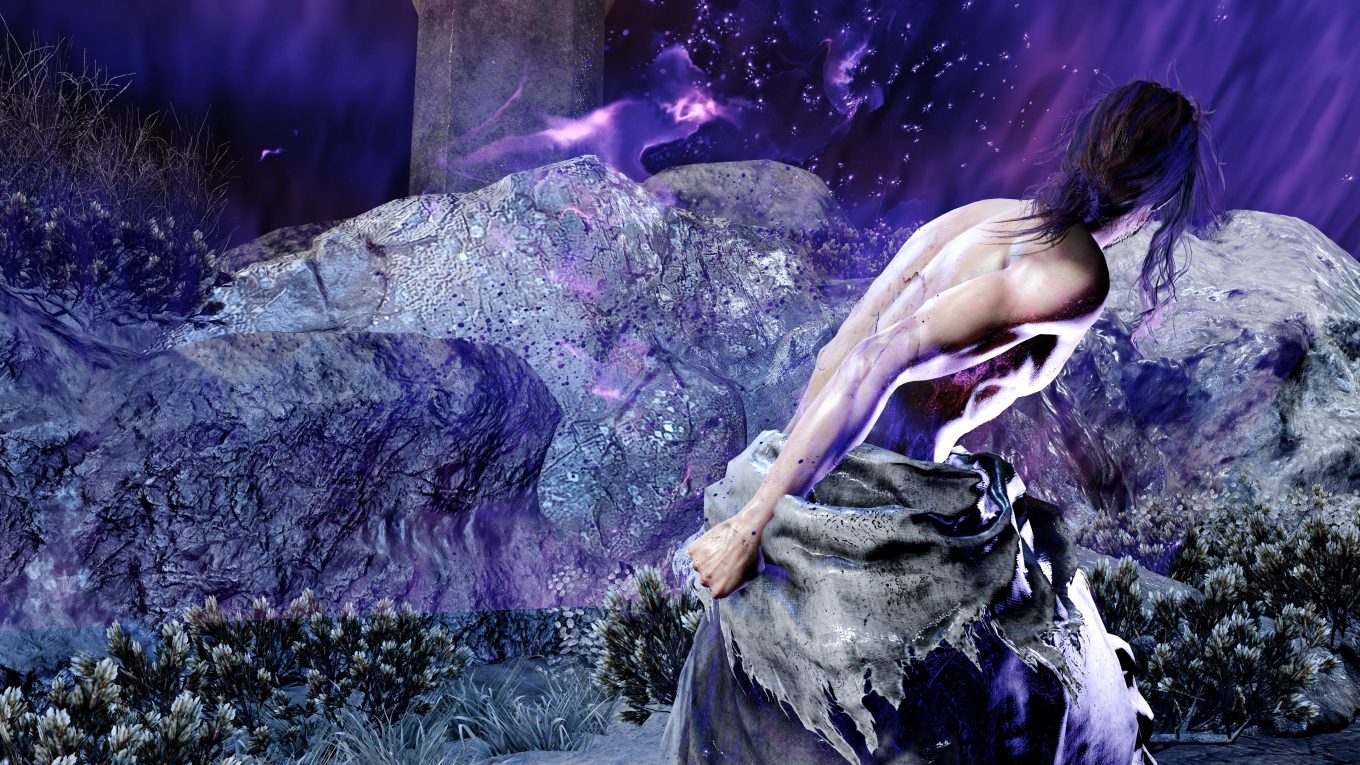 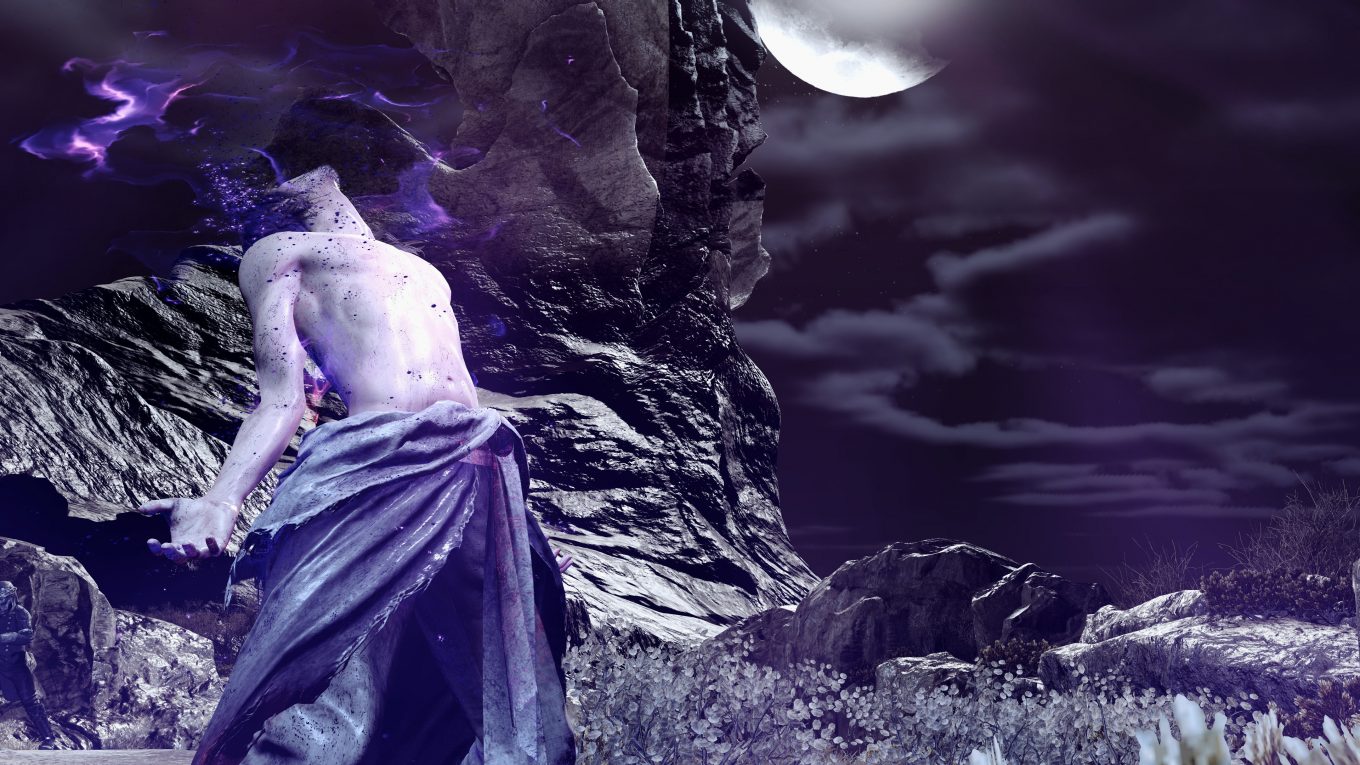 Not Ardyn’s naked torso, but I like it anyway. There’s a lot of “painting” aspect to some of the cutscenes. 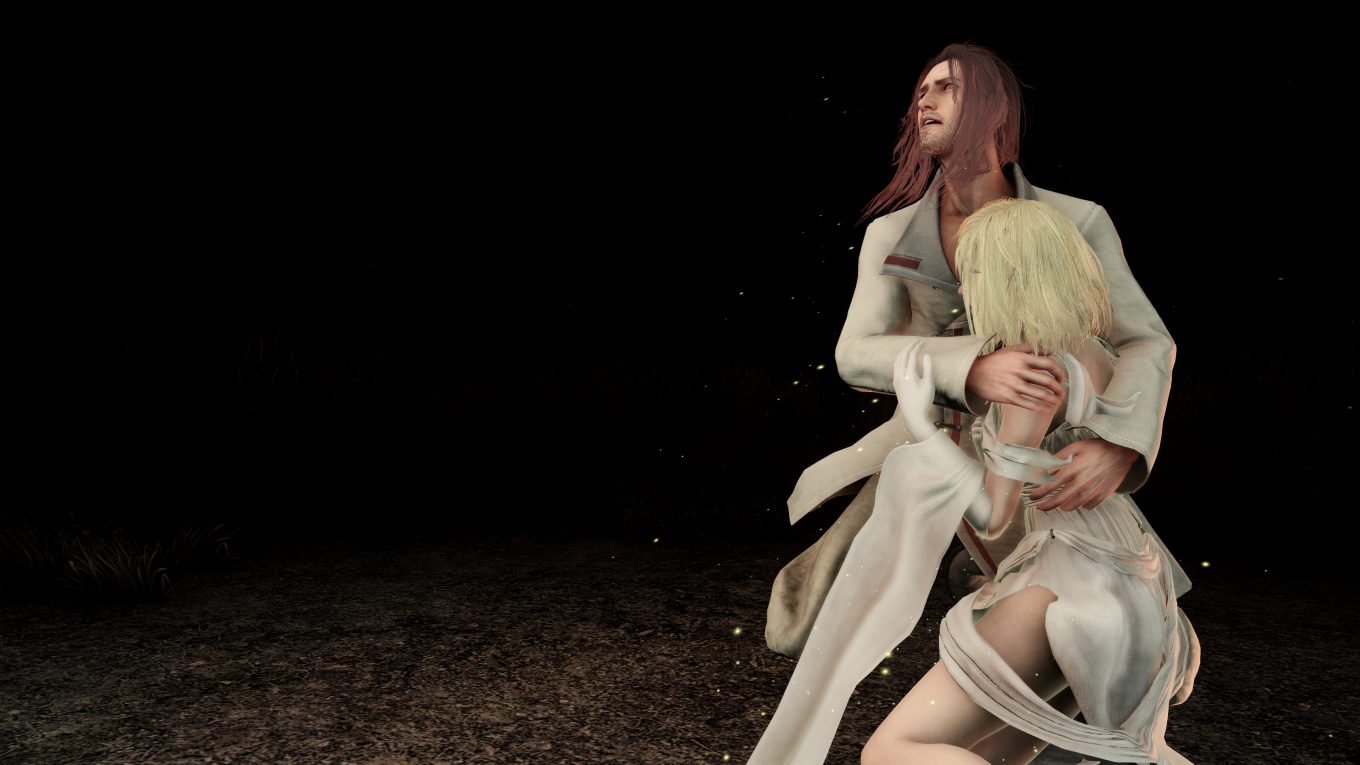 Note: This DLC is another case where I end up thinking many pics only look good on a bigger screen so when I’m running through them later I’m not sure they’re good for a blog. I’ll post a different themed entry later tho. For myself, I found the DLC overall fun, somewhere between Ignis’ DLC and Prompto’s. Like if Ignis’ was an A and Prompto’s was a B-, Ardyn’s would be a B+. Just in my opinion, of course. The one area Ardyn’s dlc is lacking is combat. It’s like Ardyn is Superman and there is no Kryptonite. But they did go all-in for story and lore. And the hats. 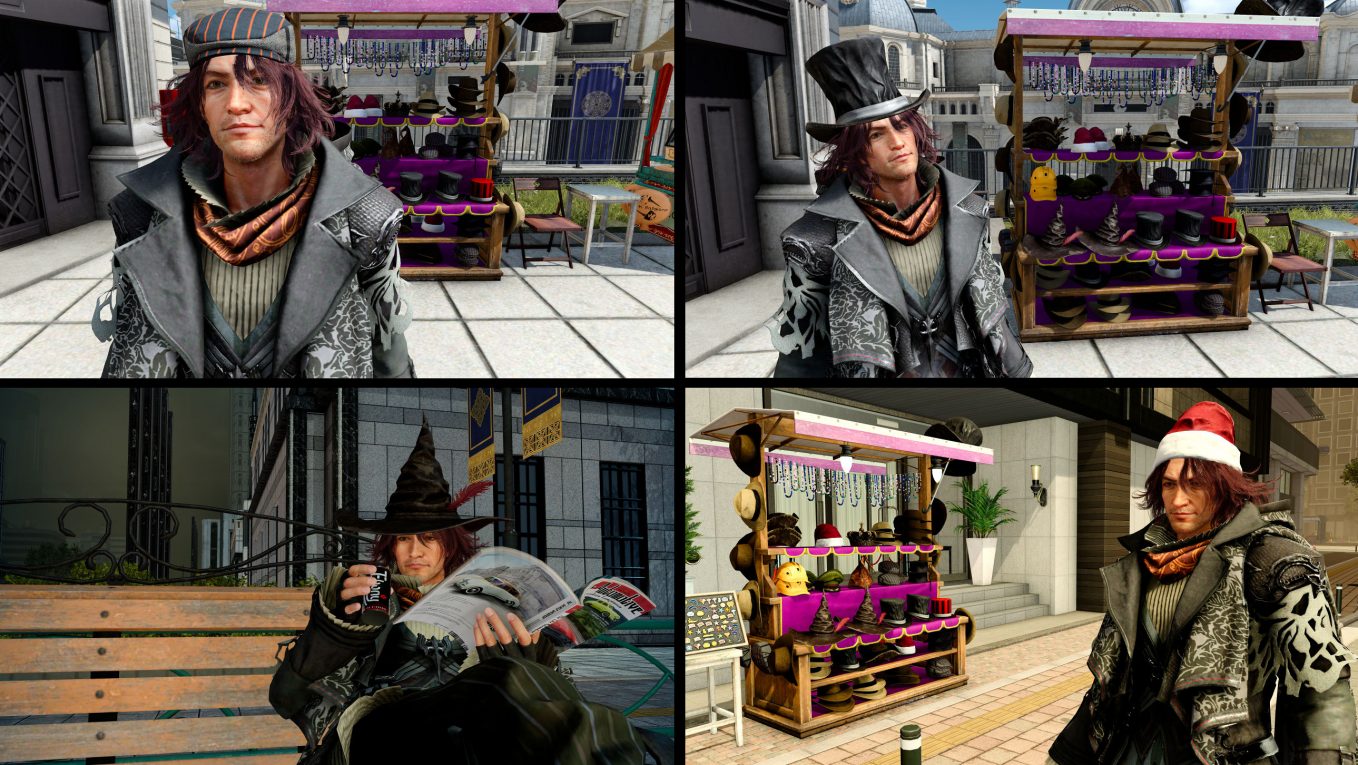 Ardyn doesn’t need a bed to rest in – a bench and some coffee will do. 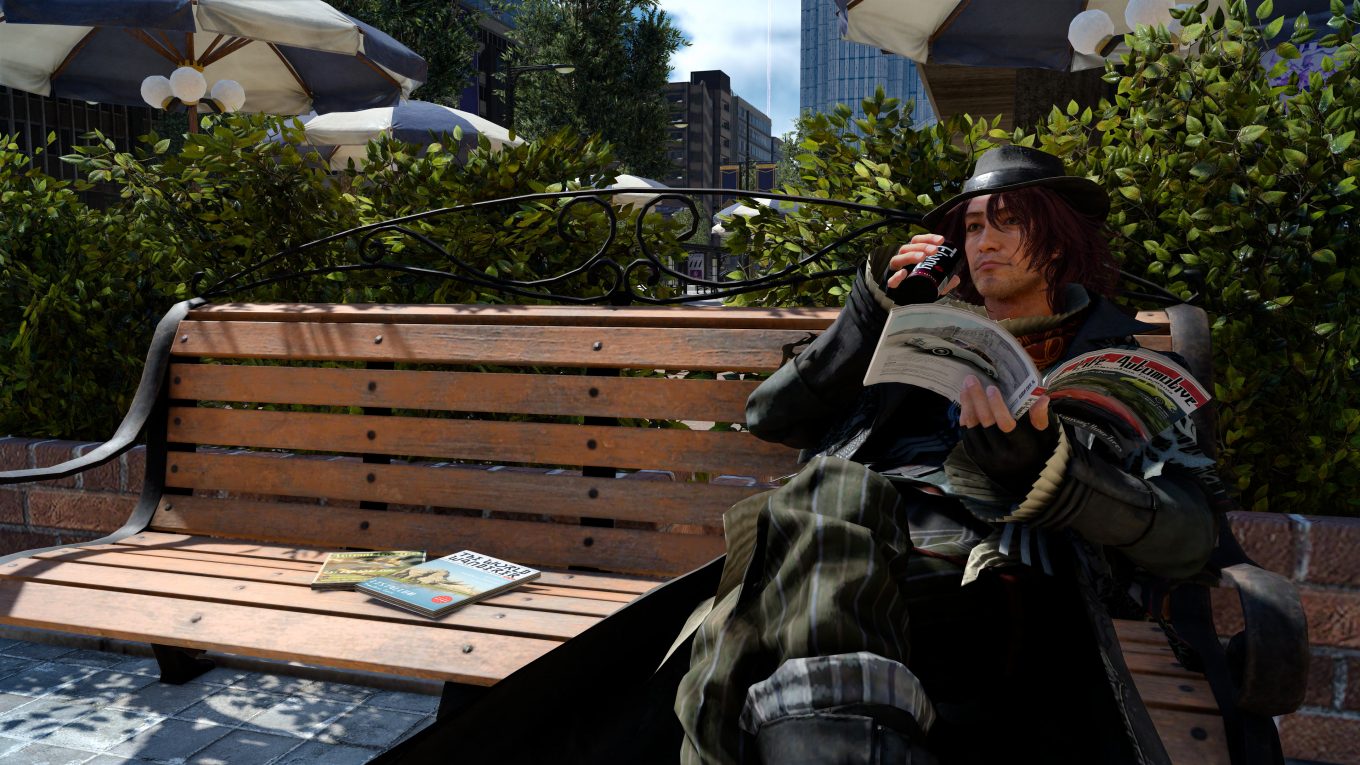 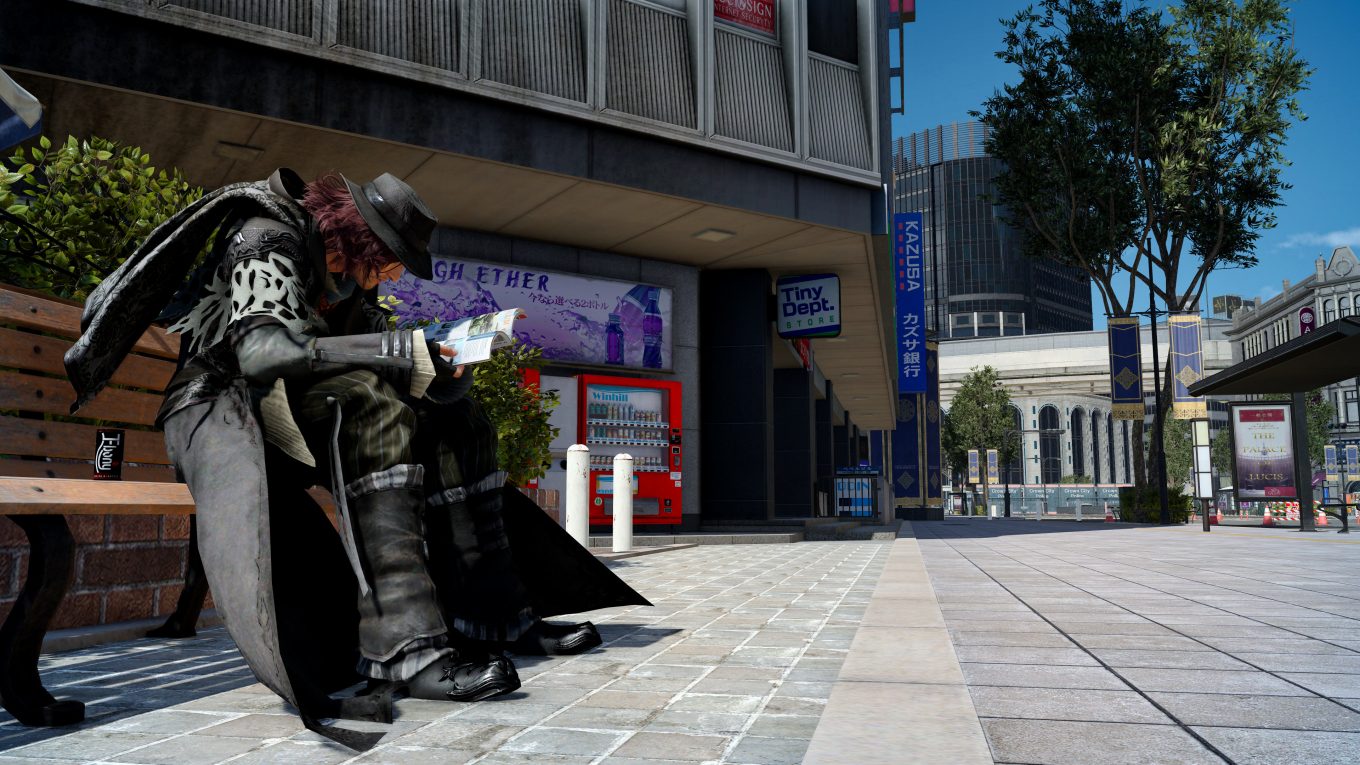 Ardyn mid-aerial attack. That hat stays on, of course. 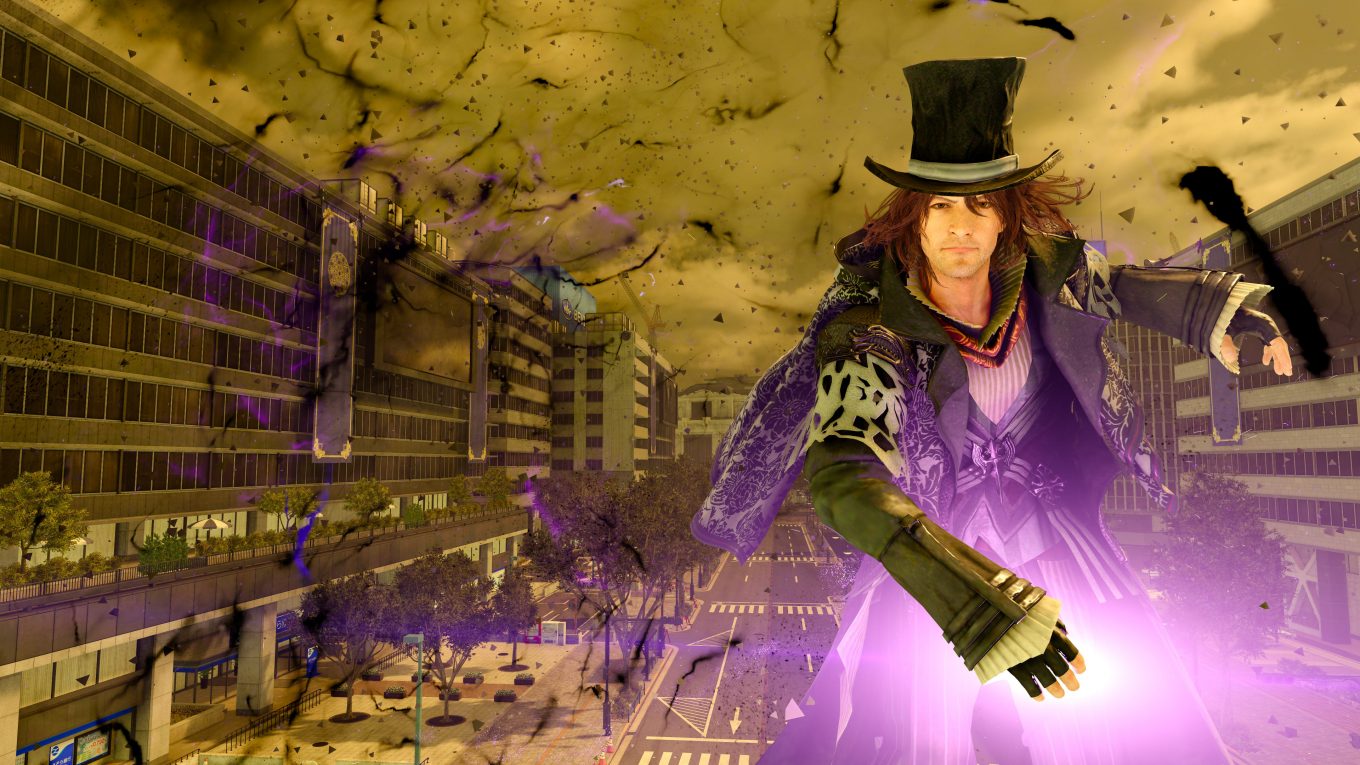 I still like his usual hat the best, although that top-hat comes close.